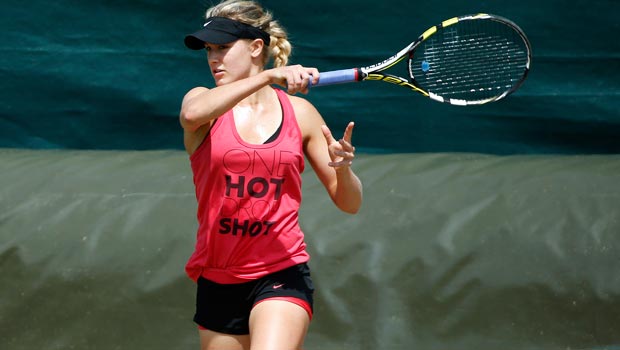 Eugenie Bouchard insists she has the ability to go all the way and win at Wimbledon this week.

The Canadian has had a fine season in the Grand Slams after reaching the semi-finals at the Australian and French Opens.

Bouchard, 5.00 to win Wimbledon, will now take on Angelique Kerber in Wednesday’s quarter-final clash after the German beat Maria Sharapova in an epic battle in the fourth round.

Sharapova was heavily fancied to win the title due to the exits of Serena Williams, Li Na and Caroline Wozniacki, but Kerber eventually claimed the victory on her seventh match point.

Bouchard and Kerber will meet on Wednesday on Court One and the former is feeling confident about her chances.
The 20-year-old said: “I’ve learned a lot. I think the main thing is the confidence I’ve added since the beginning of the year.

“I believe in myself. Every match I play, I believe I can win. I’ve proved to myself I can play on the big stage as well. I’ve played on centre courts of most of the slams, big moments, big matches. I’m proud of the way I can handle it out there.”

After her impressive win over Sharapova, Kerber, 7.00 to win Wimbledon, is relishing the chance to reach the final four at Wimbledon.

She was beaten by Bouchard in the French Open in May, but Kerber is hoping the grass surface will work in her favour.

“I’m feeling better now and I’m feeling better on grass,” Kerber said. “I’ve never played against her on this surface, so I will be focused just on myself. I’ll just try to be aggressive, play my game, and not focus on her.”