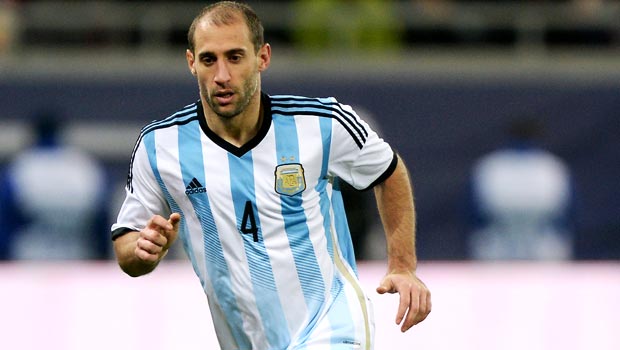 Argentina defender Pablo Zabaleta has warned his team-mates that they must focus ahead of their last-16 clash against Switzerland on Tuesday night.

The Manchester City right-back will line-up alongside his teammates in confident mood after the South American side topped Group F with maximum points.

Their final game against Nigeria was a stern test but they came through it with another win, although Sergio Aguero picked up a knock that could rule him out of Tuesday’s encounter.

Zabaleta believes his country are improving each and every game, and he believes his side will show their capabilities against Switzerland.

Argentina are among the favourites to win the World Cup, but Zabaleta has urged his side to not get carried away.

He told FIFA.com: “We have to stay focused. There are no easy games at the World Cup. Just look at the teams that have been knocked out, and those that are still in the race.

“Everyone wants to get to the final. I hope we can take our first step against Switzerland. We should be happy with our results so far. It’s not easy to take nine points from three games at the World Cup.

“What’s most important, though, is that we’re improving as the tournament progresses. Against Nigeria we played better than we had in the previous two games, which was our objective. From now on the slightest mistake can send you home.”

Zabaleta’s side are installed as 1.54 favourites to win on Tuesday, with the draw at 4.11, while Switzerland are the big outsiders at 6.36.