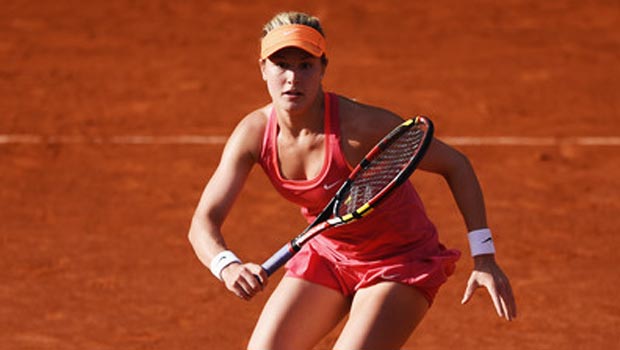 Eugenie Bouchard enhanced her ever-burgeoning reputation with a straight-sets destruction of Angelique Kerber to advance to her second successive Grand Slam quarter-final.

In only her second appearance at Roland Garros, the 20-year-old is one match away from equalling her semi-final appearance at the Australian Open in January, and her performance on Sunday was a statement of intent to perhaps go further.

The young Canadian flew out of traps against the eighth seed, racing into a 5-0 lead before Kerber knew what was happening, putting an enormous amount of the pressure on the German’s serve in particular.

The first set was over in just 23 minutes and with breaks of serve in the third and fifth games of the second set, before cruising through to the last eight with 6-1 6-2 victory.

Bouchard’s power, variety of shot as well as speed across the court proved too much for the eighth seed – the fifth casualty of the top eight seeds – and she will fancy her chances of a semi-final place as she will take on either Carla Suarez Navarro or Ajla Tomljanovic next.

Navarro is actually seeded higher at 14 to Bouchard’s 18, but the former Junior Wimbledon champion is in confident mood for whoever she faces.

“I just felt good out there,” Bouchard said. “I think I executed my game plan really well, so I’m happy with that. I was really mentally prepared for anything, for a battle.

“I’m confident and I really believe in my skills. I believe I can play with the best girls out there.

“I feel like since the beginning of the year I have been improving my game, since Australia I’m at a different level from there.”

In the men’s draw, Andy Murray survived a massive scare to edge past Philipp Kohlschreiber 3-6 6-3 6-3 4-6 12-10, in a game that had started on Saturday before fading light halted play.

There were no such dramas for Tomas Berdych who beat John Isner 6-4 6-4 6-4, while Fernando Verdasco proved too strong for home favourite and 12th seed Richard Gasquet, winning 6-3 6-2 6-3.