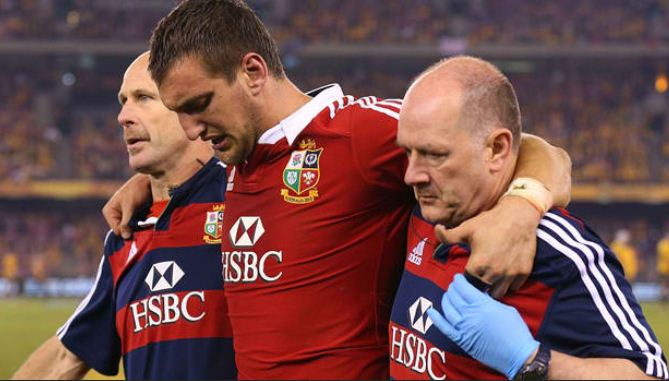 Cardiff Blues say Sam Warburton may be sidelined for up to four months due to injury he suffered on British and Irish Lions tour of Australia.

The 24-year-old missed the final Test victory in Sydney, after suffering a hamstring tear during the second Test defeat in Melbourne.

Warburton only just returned to the UK earlier this week and although he is yet to be fully assesed, the Lions camp have suggested he will miss the start of the domestic season.

Blues chief executive Richard Holland revealed: “I haven’t had an update on Sam but I’m led to believe it could be three or four months.

“The Blues medical staff haven’t had a look at him, so they’ll be working with the Lions medical staff to try to get him back into fitness as soon as possible.”

If the early suggestions are correct, the Lions skipper will not only miss the start of the Pro12 campaign, but will be a major doubt for the opening weekend of the Heineken Cup on October 11.

Warburton is expected to be back for Wales’ Autumn internationals, though, with the Six Nations champions set to face South Africa, Argentina, Tonga and Australia.

Meanwhile, Cardiff are more upbeat over the fitness of loosehead prop Gethin Jenkins, who was named in the original Lions squad but was forced to withdraw with a calf injury.

Holland added: “Gethin is under monitoring with our medical staff so we’re hopeful on him being OK for the start of the season.”