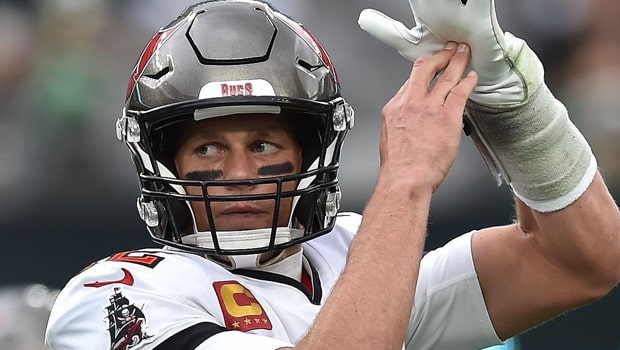 Tom Brady on his Let’s Go podcast on January 24 about his wife and family and football. “It pains her to see me get hit out there.  And she deserves what she needs from me as a husband and my kids deserve what they need from me as a dad.”

Multiple reports swirled on Sunday, January 23 that Brady, who turns 45 in August, could retire after his team’s 30-27 defeat to the Los Angeles Rams in an NFC Divisional Playoff Game. Brady — who has won seven Super Bowls and has one year remaining on his contract — tried to rally the Buccaneers on Sunday, but fell short.

Brady rallied the Buccaneers from a 27-3 deficit, only to lose on a walk-off 30-yard field goal by Matt Gay.

Will Brady hang it up?

“That’s a good question. I don’t know,” Brady said earlier last week. “I think I’ll have to just, after every year, think about what the situation looks like for me, personally and professionally. Obviously, I love playing. I don’t think my love will go away. I think I’ll be able to do it, it’s just the other things are kind of happening in my life, in regard to family situations. My kids are not getting younger, and I want to make sure that they get what they need, too.”

Brady’s agent, Don Yee, told The Associated Press last week he doesn’t know when Brady will hang it up.

“He can do it as long as he wants, because his intangibles really are very much off the charts,” Yee said for an upcoming episode of the AP Pro Football Podcast. “I’ve been around professional athletes since 1974 and I’ve seen a lot of different types of athletes. And I think all the very best will tell you the intangible part is critical. There are a lot of great, physical specimens, but to keep trying to do something for a long period of time and to do it well, you have to have other intangibles. … you have to want to get up every morning to be great.

And so he still possesses all of that and more. And so I don’t. … It’s going to be his decision, and I would never, ever speak on his behalf on this issue. But he clearly is still performing very well.”

Brady also has said: “When I suck, I’ll retire.”

In his 22nd season, Brady led the NFL with a career-high 5,316 yards passing and 43 touchdowns while completing 67.5 percent of his passes, so he clearly didn’t suck.

Still, according to ESPN, there’s “internal uncertainty” within the Bucs about what Brady will do. And Tampa Bay, according to the report, “would be willing to bend over backward” to convince Brady to play for one more year.

In a pregame interview with NBC’s Al Michael and Cris Collinsworth, Brady said he would like to win another Super Bowl, but wasn’t sure this was the year — seemingly foreshadowing the elimination against the Rams.

One rumor has Brady and Buccaneers head coach Bruce Arians retiring after the playoffs, with defensive coordinator Todd Bowles taking over.

One of Tom Brady’s former teammates, ex-Patriots linebacker Rob Ninkovich, said last Wednesday on ESPN’s “Get Up” that it “wouldn’t surprise” him if Brady retired.