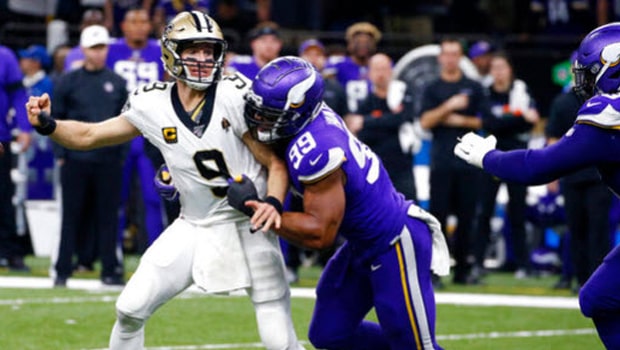 Sometimes the NFL Wild Card round can be a rather dull affair, but it was not the case this season. It was the year of the underdog, with three dogs heading to the Divisional Round and the fourth one decided in the overtime for the favorite. Two of the biggest favorites involved in the Wild Card games, New Orleans Saints and New England Patriots crashed out against their much lower rated opponents Minnesota Vikings and Tennessee Titans. Meanwhile Houston Texans sent Buffalo Bills packing in an overtime spectacle and Seattle Seahawks took the victory against injury-ridden Philadelphia Eagles.

While ousting the Saints and Patriots was a remarkable deed, Vikings and Titans head to the Divisional Round as even bigger underdogs. Titans will take on the number one team in the NFL this season, Baltimore Ravens, led by sensational quarterback Lamar Jackson. The Ravens are the front runners to win the Super Bowl with odds of 2.80. Against the Titans, Jackson’s bunch gets 8.5 points to cover and their odds to win hover around 1.24.

Vikings will go and visit San Francisco 49ers, a team that surprised many with their 13-3 record and a final breakthrough season by Jimmy Garoppolo. Minnesota’s hero for the Wild Card game was Kirk Cousins, who took the needed risks to take his team ahead and eventually win in the overtime and it will be an intriguing matchup between Garoppolo and Cousins. Vikings did lose their final two regular season games, but beating Saints made their stock rise some and now their Super Bowl chances are rated at 15.00. The 49ers are still clear favorites though and get 7.5 points, while the odds to win the game hover around 1.30. They are also regarded as shared 2nd favorites to win the Super Bowl, with odds of 4.25.

The clearest fixture in the Divisional Round, judging by the odds, seems to be Kansas City Chiefs hosting Houston Texans. Texans had arguably the easiest route through Wild Card round, facing Buffalo Bills and they struggled at that already. Kansas City took the league once again by storm and recorded 12 wins, with Patrick Mahomes one more year of experience under his belt. Super Bowl odds for Chiefs are 4.25, tied 2nd with 49ers. They win Texans with odds of 1.22 and the point spread of 9.5 is the biggest in the Divisional Round.

Last but not least is Seattle Seahawks, who managed to once again defend their way into the second round. They are facing Green Bay Packers, who finished with the record 13-3 despite somewhat of a roller coaster season. Aaron Rodgers was often left too alone in the offense, but the Packers defense came out big when needed. Seahawks have had troubles in their offense, so it just might be another defensive battle between the teams. Packers are favored by 4.0 points and receive odds of 1.52 to win the game, while they are the fourth favorite to win the Super Bowl with odds of 9.0.