Posted by Olumide Akinnifesi on January 7, 2020 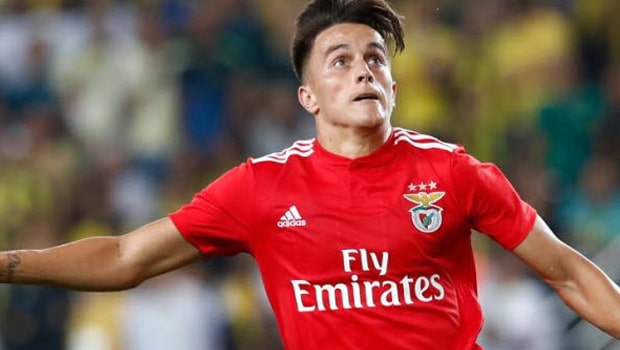 Primera Liga side Benfica moved seven points clear ahead of rivals F.C Porto, who are second on the log. They have previously claimed a victory over Sporting Braga before defeating Vitoria de Guimaraes on their turf.

Franco Cervi’s brilliant first-half strike was what separated both sides at the Estadio Dom Afonso Henriques, despite the dominance from the hosts throughout the game to secure a slim win.
Table-toppers Benfica was the first to threaten Guimaraes’ goal in the 21st minute inside the box as Cervi’s low strike broke the deadlock after being set up by Pizzi’s cut back from the right-hand side.

Vitoria rallied round as they look to equalize as Lucas Evangelista’s strike mid during the first-half was brilliantly saved by Odisseas Vlachodimos, who was also on standby to deny Marcus Edwards down the byline, keeping his side from conceding as they head into the break.

Going into the second half, Vitoria came out blazing as they had the lion’s share of the possession and came close to scoring in the 68th minute after Benfica’s Vlachodimos spilled an incoming cross but had to make amends after tipping over a ferocious strike from Evangelista’s effort inside the box.

The waves of attack kept on coming from the home side as Benfica held their breath after Davidson’s long-range effort went wide in the 80th minute.

Benfica almost got a second through Pizzi after an error from Tomas Tavares at the back, leaving the striker to face the goalkeeper. Still, Douglas’s timely intervention denied the striker who could have added to his tally.

Ivo Vieira’s side was reduced to 10 men after Rochina received his marching orders for an open stud challenge on Andreas Samaris late into the game, which caps off the 14th victory in 15 league matches for Benfica this season.

Benfica Lisbon are priced at 1.45 to win the Primera Liga, while rivals FC Porto are set at 2.65