Posted by chris schweizer on January 2, 2014 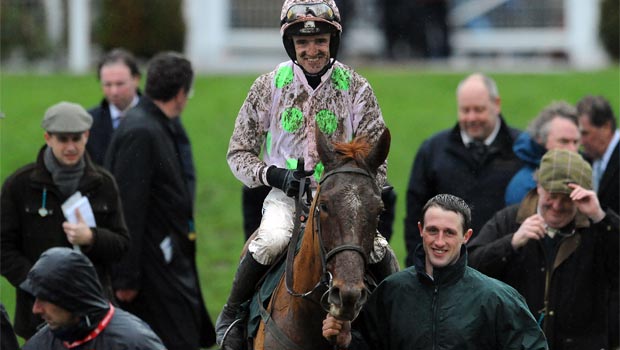 Jockey Ruby Walsh has compared the unbeaten Annie Power to the likes of Kauto Star and Denman after braving the bottomless conditions to win at Cheltenham on New Year’s Day.

The Irish raider made it nine from nine at a sodden Prestbury Park on Wednesday, further enhancing her claims as a future Cheltenham Festival winner with another assured display under Walsh.

The six-year-old travelled well throughout, recovering from a mistake at the last to comfortably hold off the challenge of the Paul Nicholls-trained Zarkandar to win by eight lengths.

That was Annie Power’s second victory on English soil after her triumph in the Coral Hurdle at Ascot in November.

The next move for the Willie Mullins-trained mare is a mystery at the moment as her camp continues to build towards the Cheltenham Festival.

Annie Power has plenty of options for the Festival, with runs in the Champion Hurdle, World Hurdle and OLBG David Nicholson Mares’ Hurdle all still possibilities.

While Walsh is staying tight-lipped over which race he believes Annie Power should go for, he was happy to lavish praise on a horse who had shown she is a contender, no matter the going, on Wednesday.

Walsh said: “She’s a very good mare, and was entitled to improve from her first run back at Ascot.

“She handled the ground and jumped very well, apart from a minor hiccup at the last. Although this ground isn’t easy on the eye, it’s a pleasure to ride in.

“If you look back, all the best horses go in the soft, look at Denman, Hurricane Fly and Kauto Star, they all handled those conditions.

“She’s nine from nine now, and that’s not an easy record to achieve. But from day one she has never been anything but very good.”