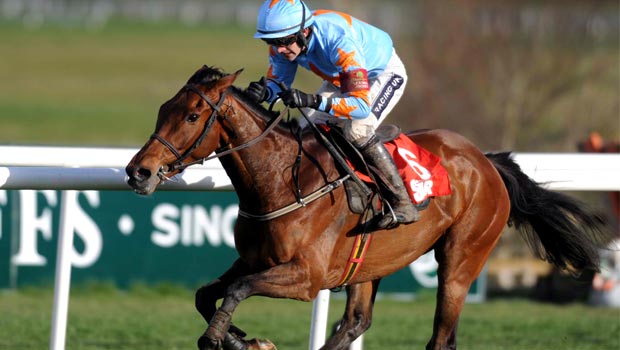 Jockey Ruby Walsh has tipped Un De Sceaux to cause an upset at the Cheltenham Festival this year, claiming he has the potential to surprise the likes of Hurricane Fly and The New One in the Champion Hurdle.

The six-year-old has flown under the radar somewhat in the build-up to this year’s Festival at Prestbury Park having yet to compete in a graded contest.

The Willie Mullins-trained gelding might not have tested himself against the best hurdlers yet but has destroyed the competition in his six outings to date.

The French import has won four times over hurdles and two bumpers by a combined distance of 128 lengths, notching her average winning distance to 21 lengths with last weekend’s triumph in Navan.

Un De Sceaux won by 53 lengths in Ireland last Sunday with Ruby Walsh on board and the 34-year-old jockey believes the sky’s the limit for the high-quality juvenile.

“I must mention Un De Sceaux, who was again so impressive when winning in a canter at Navan last Sunday. What I love about this horse is the way he behaves in the middle of a race,” he wrote in his column in the Irish Examiner.

“He just sustains a relentless gallop and then is able to keep it up it right to the line. Truth to tell, I just don’t have a clue as to how good he is.

“How far can he go, I just don’t know. But here’s the thing, I’m of the opinion Un De Sceaux will manage to stay any trip.”

Un De Sceaux is expected to run in a graded contest before the Cheltenham Festival where he is likely to meet stable mate Hurricane Fly in the Champion Hurdle.

The defending champion and Un De Sceaux are expected to represent Mullins’ yard for the opening day’s feature race, with The New One, Rock On Ruby, My Tent Of Yours, Jezki and Our Conor making up a high-quality field.