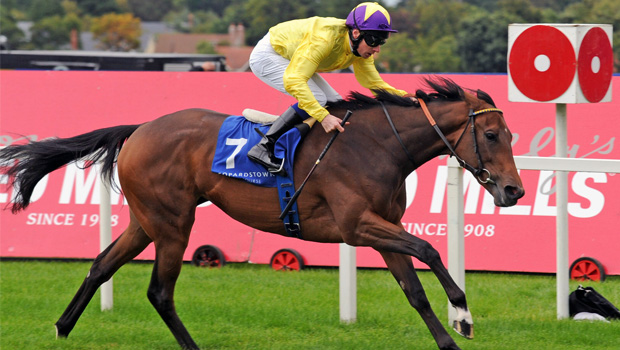 The John Oxx-trained My Titania battled her way to victory at The Curragh on Sunday to give her sire Sea The Stars a first Group victory.

The filly, sporting the yellow colours of Sea The Stars’ owner Christopher Tsui, was sent off as the 11/10 favourite to beat her seven rivals in the Group 3 C L Weld Stakes, and despite idling a bit once sent on by jockey Declan McDonagh, she had enough left in the tank to hold on from the fast finishing outsider Chicago Girl.

Impartial observers may not have been entirely impressed by the fact that she did not put more distance between herself and the runner-up, but her trainer was not unduly worried.

“She’s a bit like her sire in that she pulls up a bit in front. She didn’t do a lot when she got there and the runner-up challenged wide of her.

“She didn’t really know where she was and it nearly caught her out.”

Oxx rates her highly and reckons that she could figure in next season’s Classics, without getting too carried away.

“She won’t run again this year. If all goes well she’ll be in the 1,000 Guineas and Oaks in Britain but that’s a big step up. We’ll see what the spring does,” he said.

Oxx also revealed that he has more progeny of Sea The Stars at home:

“I have a couple more of them myself to run. A few have met setbacks and won’t run this year, but we’re happy with them. They’re showing a lot of promise.”

As for My Titania, she is generally a 16-1 chance for next year’s Qipco 1,000 Guineas at Newmarket.