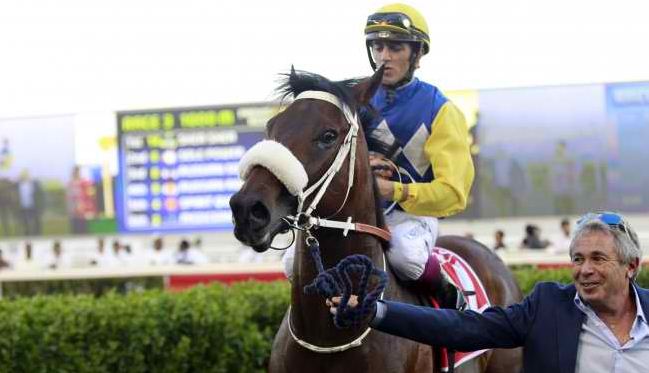 South African raider Shea Shea is one to beat in Saturday’s prestigious Group 1 Darley July Cup, according to his trainer.

The six-furlong contest, the centrepiece of Newmarket’s July Festival, has attracted a quality field, including the Mike de Kock-trained speedster, who bids to go one better than when caught near the finish by Sole Power in the King’s Stand Stakes at Royal Ascot.

That was over five furlongs, but de Kock believes he knows how to orchestrate a victory over Saturday’s longer trip. He said: “He ran a cracking race at Ascot, but he’s a hold-up horse. He likes to go at them and when he gets in front he likes to prick his ears and relax. He did that in Dubai and when Christophe (Soumillon) stopped riding him he put the brakes on straight away. He’s the type of horse that wants a challenge.

“We have to delay his challenge as late as possible. He likes to do that and plus we are going an extra furlong. He has won at that trip but not at this level. He’s pretty good at five furlongs, six is uncharted territory at that level but we have to hold him up and Christophe is going to have to hold his nerve for as long as possible.

“He came out of Ascot pretty well. He wasn’t well enough to run on the Saturday again (in the Diamond Jubilee), but we’re happy with the way he came out of the race. I think he’s in fairly similar form and is probably a bit fitter, which he is going to need to be for the six furlongs.”

If Shea Shea is to prevail, he will have to see off the challenge of Lethal Force in particular. His trainer Clive Cox expects him to make a bold bid to double up after landing the Diamond Jubilee at the Royal meeting.

Cox puts the improvement down to the way his charge has grown since last year:

“I expressed before he has really blossomed from three to four and that is clearly visible in the standard of performance we have been able to see so far.”

Lethal Force lost out narrowly to Society Rock on his seasonal reappearance at York in May but reversed the form at Royal Ascot despite being worse off at the weights.

“He improved markedly even from that great run in the Duke of York with the weight situation and everything with Society Rock having a Group One penalty for that meeting,” said Cox.

“We were on level weights at Ascot so we clearly upped our game a bit and he’s in similar form to that.”