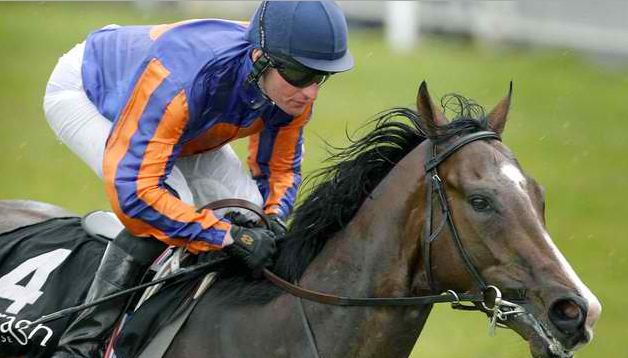 Irish trainer Aidan O’Brien is aiming for remarkable 11th victory in Dubai Duty Free Irish Derby when he sends out Ruler Of The World.

The Ballydoyle handler has sent out some of the biggest names in racing in the past to capture the Group One event on home soil, including the likes of Galileo (2001), High Chaparral (2002), and, more recently, Camelot 12 months ago.

That trio had all earlier won the Epsom Derby, and now Ruler Of The World bids to emulate them, with son Joseph in the saddle, taking over from Ryan Moore, who partnered the colt at Epsom when O’Brien junior opted for Battle Of Marengo.

O’Brien junior, who rode his first Irish Derby aboard Camelot 12 months ago, said: “He’s an exciting horse. He’s won three times from three runs and he won very nicely the last day at Epsom so we’re looking forward to it.

“He was ready to run early as a two-year-old and he was in the Chesham at Royal Ascot until very late on, he was going to run but then he got a little cough.

“They couldn’t shift the cough for the rest of the year but he’s a very exciting horse.

“You’d be hoping he’ll improve for the experience of Epsom, the Curragh is a fair track and he’s won there already.”

O’Brien senior revealed: “We have been very happy with him since Epsom.

“He impressed us at Epsom and we think the Curragh will suit him even better.”

To ensure a decent pace, O’Brien will also saddle Festive Cheer, the mount of Seamie Heffernan.

Libertarian gave trainer Elaine Burke her biggest thrill when finishing second to Ruler Of The World at Epsom, and will have his final start for her, having been supplemented and bought by Godolphin.

An unexpected winner of the Dante Stakes at York prior to his terrific effort at Epsom, he has more improvement to come, according to the trainer’s husband Karl.

“He’s going there in great form. I’ve been very happy with his work since Epsom and I’m sure he has improved,” he said.

“Physically he looks a more mature horse than he was going into Epsom and I think mentally he has sharpened up as well.

“Considering he did not handle the track that well at Epsom, he did extremely well to finish as close as he did.”