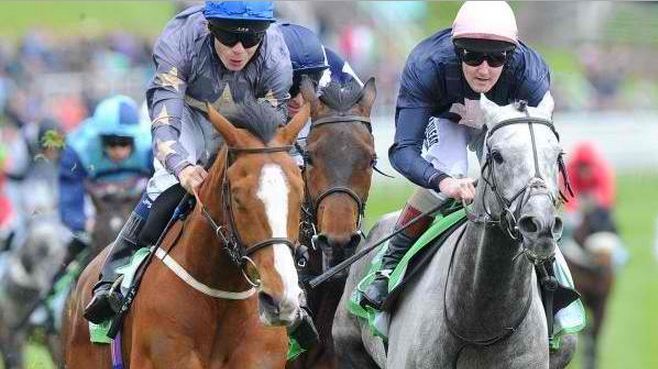 Chester Cup winner Address Unknown has been done no favours by draw for Saturday’s Northumberland Plate at Newcastle, boxed in stall 15.

Address Unknown and stablemate Ingleby Spirit benefited from their low draws at Chester to finish first and second, but trainer Richard Fahey is pessimistic about the duo’s chances of overcoming wide berths in the race known as the ‘Pitman’s Derby.’

“Two miles is right up Address Unknown’s street. He’s in good order. He had a great draw in the Chester Cup and a great run in the race,” Fahey said. “The handicapper didn’t overreact and has given him every chance.

“At York last time out in a Listed race they hack cantered and then quickened away from him, but I’m sure that won’t happen at Newcastle.

“They will ground it out the whole way so you have to be stayers and both definitely are.

“Owner Marwan Koukash has sold this horse and it’s off to America after this race.

“We are claiming off Address Unknown to give him every chance.

“Ingleby Spirit was second in the Chester Cup and ran a blinder. It’s a two-mile race but you do need a decent draw.

“We stepped him up in trip on the Flat and it brought an improved performance.

“At Chester we got two good draws, in two and three – here we’ve got 15 and 18. We’ll need them to go flat out and pick them up late, as from that draw they’ll struggle to get in. It’s not ideal, but if they go flat out we might have a chance of coming home.”

North Yorkshire rival Moidore is well fancied, and his form now looks very strong with the horse that beat him at York following up at Royal Ascot.

“We’d be happy enough with the draw in stall 10, that’s not too bad, but we wouldn’t want to be any wider,” said trainer John Quinn’s son and assistant Sean.

“The horse is in good form and he’s been kept for the race. He was second at York last time, we thought he’d run a good race and in hindsight he ran a super race because we bumped into one that day in Well Sharp. We were giving him weight and that now looks to have been impossible looking at what he did at Ascot.

“He beat the rest of the field by four lengths, including some nice stayers.

“There should be no excuses for anyone if it’s good ground – the best horse should win.”