Nicky Henderson unsure where next Bite comes from 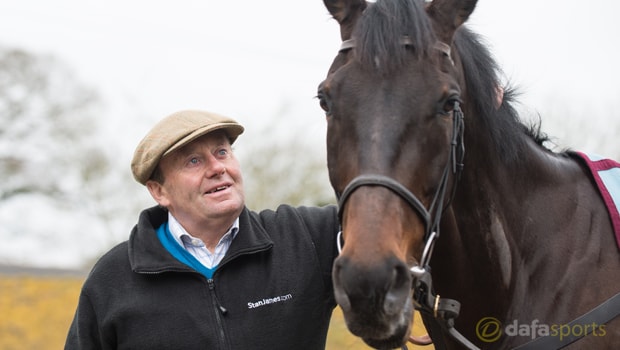 Nicky Henderson is not sure where King George hero Might Bite will run next, or even if he needs another run before the Cheltenham Gold Cup in March.

The champion trainer stressed that Might Bite will only go somewhere he gets decent ground ahead of the Festival.

A year on from his last-fence fall in the Kauto Star Novices’ Chase, Might Bite was a model professional in landing the Christmas showpiece at Kempton.

He was handily placed throughout, ensuring front-running Bristol De Mai did not get things his own way.

Nice de Boinville took up the running coming to the third last fence and Might Bite was measured at the last, before coming home strongly to hold off rallying duo Double Shuffle and Tea For Two.

It was a display that filled Henderson with joy. He said: “You can’t help but love him, he’s just so gorgeous and he loves to show off.

He likes to jump like that, boss it and say, ‘Look at me’. “He was enjoying himself. We have our scheme, which is to try not to press before the last.

We don’t let him know that it’s the last, and then you can go for your life after it. It’s to try to iron out whatever was going wrong last year.

“I could see he was on a very good stride but Nico [de Boinville] was being very sensible, he had him in his hands on a good stride a long way out.”

The Gold Cup is now the big target and with his RSA Chase success in mind – Might Bite held a commanding lead jumping the last only to veer right and idle badly before scrambling past stablemate Whisper on the nod – Henderson knows that returning to Cheltenham will be a different challenge.

“He has got to behave at Cheltenham, hasn’t he? What happened here last year was one of those things.

It didn’t happen again today thank goodness, but there was no reason why it should,” he added.

“Cheltenham is a different ball game. He’ll jump the last and will probably want to go right.

“The next question is where do we go next, what are we going to do? He could have one run.

“My thoughts are, does he even need a race? It won’t be a slog in a bog wherever it is.”

Might Bite is 6.00 to win the Blue Ribband in March, with reigning champion Sizing John favourite at 5.00.