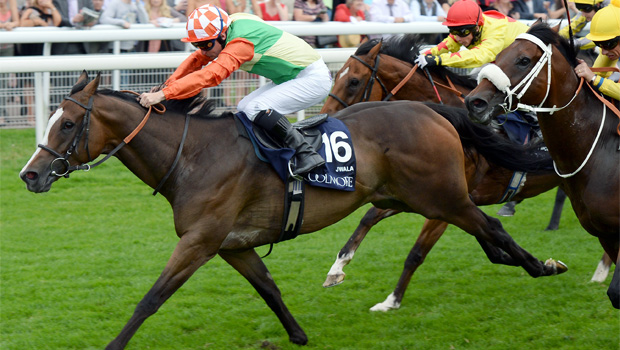 Jwala trainer Robert Cowell says the filly will definitely run in the Qatar Prix de l’Abbaye following her win in the Nunthorpe Stakes.

Jawla has pulled up well since winning the five-furlong Group One race at York on Friday, a result that also gives the four-year-old an automatic entry for the Breeders’ Cup Turf Sprint.

It is a scenario that will give connections plenty of food for thought, and there is every chance Jwala could end her racing career in the Turf Sprint at Santa Anita.

Cowell says a decision will be made in due course, but did confirm that Jwala will definitely run in the Abbaye at Longchamp next month.

“She seems to have come out of it in really good order,” said Cowell.

“The Abbaye is definite and she won’t be racing next year, but there’s a possibility she may take up an invite for the Breeders’ Cup. It’s something she’s got an automatic invitation to.

“The owners are mulling over their options at the moment. They probably don’t have a lot to lose so there’s a small chance she may take up that engagement as well, but we’ll see.”

Meanwhile, stablemate Spirit Quartz could also try and bounce back in the Abbaye following a disappointing run in the Nunthorpe, a race in which he finished second in 12 months earlier.

“We were a little disappointed with him. The occasion got to him and he was upset in the paddock and before the race,” said Cowell.

“He wasn’t like that last year when he was second to Ortensia. I’m not sure why he was like that. We’re going to check him out in the next couple of days and make sure there’s nothing going on. If all’s OK he’ll go for the Abbaye.”

Cowell also confirmed Kingsgate Native, who was a close fifth at York, is on course for the Betfred Sprint Cup at Haydock on September 7.