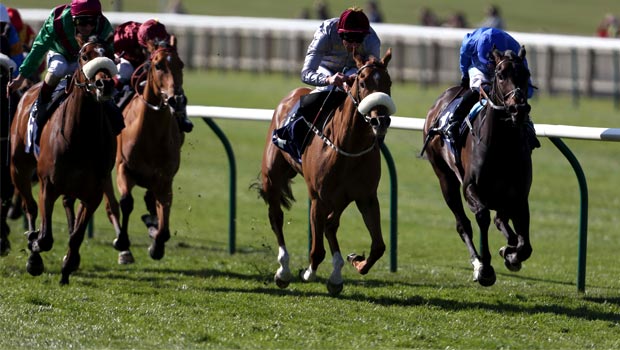 Sandiva battled her heart out to land the Lanwades Stud Nell Gwyn Stakes at Newmarket on Wednesday to earn a tilt at the Qipco 1000 Guineas on May 4.

Trainer Richard Fahey had already produced the daughter of the 2000 Guineas winner Footstepsinthesand to score in Group company in France as a two-year-old, and amid reports that she had wintered well, was optimistic about her chances in the fillies contest on Wednesday.

As it turned out she had to work hard to withstand challenges either side from strong-finisher Euro Charline and also Majeyda to capture the Group 3 affair at headquarters, but jockey Frankie Dettori was pleased with her effort considering the way the race panned out.

The Italian, now retained rider for owner Sheikh Joann’s Al Shaqab Racing operation, said: “Where she was drawn was a one-or two-length disadvantage and there was no cover, so it was a good performance. She is entitled to go to the Guineas with a good chance.”

Fahey, for whom this was a second success in the race after Barefoot Lady’s win three years ago, revealed: “Frankie is sure she will stay a mile and he spent half the race trying to switch her off and get her in.”

Marco Botti’s Euro Charline really caught the eye in second, but is not certain to meet Sandiva again in a fortnight, according to Team Valor syndicate manager Barry Irwin.

“She was finishing very fast and I am over the moon. Marco wants me to supplement her for the Guineas. I will think about it but she is also in the Irish Guineas, so we will see, ” he said.

As for Sandiva, she now has the benefit of a run under her belt as she prepares for a showdown with the ante-post favourite for the 1000 Guineas, the Clive Brittain-trained Rizeena, who will line up at Newmarket without a prep run.