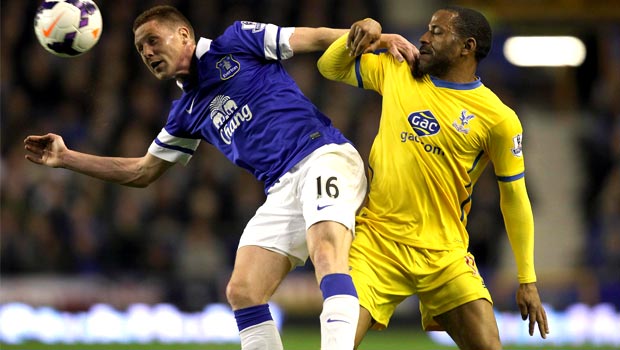 Everton saw their hopes of overtaking Arsenal to go fourth in the Premier League table dashed by in form Crystal Palace at Goodison Park on Wednesday.

With a Champions League place up for grabs at the end of the season, the last thing the Goodison faithful contemplated at kick-off was defeat, but at the end of the 90 minutes the Eagles had taken all three points.

Tony Pulis has got Palace playing some fast-flowing, attractive football, and they were good value for Jason Puncheon’s first-half strike, his fourth in three games. Worse was to come for the home side when Scott Dan extended the visitors’ lead early in the second half with a powerful header from a corner.

Substitute Steven Naismith scrambled one back, but Cameron Jerome made it 3-1 after 72 minutes, and despite a spell of late pressure and a Kevin Mirallas goal with four minutes left, Palace deservedly held on to register a fourth consecutive Premier League victory that takes them on to 40 points and up to 11th in the table.

Everton boss Roberto Martinez, who saw his side’s seven-match winning streak end, said: “I thought in the first half we wanted to win so much that we forgot about the simple basics that you need to do to win a football game.

“The way we defended carried somehow a bit of fear and that left us a bit exposed. It is not normal for us to play with that feeling.

“I thought the second half was completely different – we changed the approach, it was a bit more positive and it was back to being ourselves.

“But I think in every aspect the game played well into Crystal Palace’s hands today.”

If Everton are to taste Champions League football next season they will have earned the right, as up next are Manchester United on Sunday, while Manchester City are still to visit Goodison as well this season.