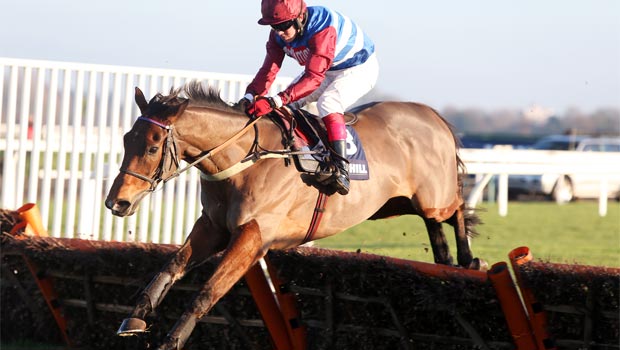 Trainer Alan King has confirmed that Grumeti will now take on Hurricane Fly in the Champion Hurdle at the Cheltenham Festival in March.

Grumeti was up against it on paper in the recent Kingwell Hurdle at Wincanton, facing more in-form and fitter rivals Melodic Rendezvous and Zarkandar.

However, he shaped really well to finish third despite not being suited by the heavy ground, and that effort was enough for King to rubber-stamp his passport to Cheltenham on 11th March.

The Barbary Castle handler said: “Grumeti will definitely go for the Champion Hurdle, having run well to finish third in the Kingwell at Wincanton.

“The ground would have been plenty deep enough for him, but he travelled strongly into the race and I would like to think there is still more improvement to come.”

King’s stable has been slowly coming back to form in time for Cheltenham, and various inmates have a choice of Cheltenham engagements.

Medermit ran an encouraging fourth in the Ascot Chase at the weekend and King was pleased with him.

“It was a big ask in that ground in such a hot race, but we needed to get him started again. He is in the Ryanair and the Gold Cup at Cheltenham, or we could wait for Aintree,” he said.

“It was tough seeing Wilde Blue Yonder take another last-flight fall at Ascot when about to win his race, but, having looked as if he was on a long stride, he changed his mind. Happily, he returned unscathed, and the plan is to still go for the Supreme Novices’ Hurdle at Cheltenham.”

And with Smad Place holding a prominent position in the Arkle betting as well, King’s stable looks all set to make a big impression at this year’s Festival.