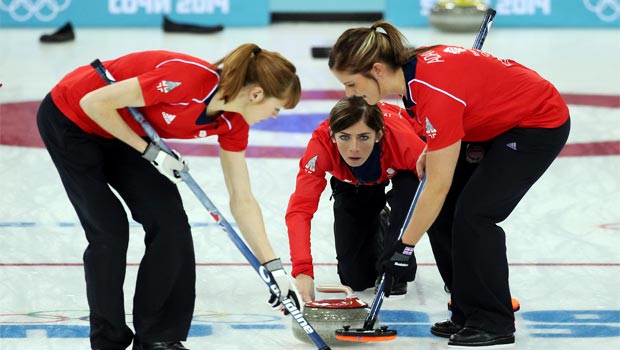 The Great Britain women’s curling team beat Switzerland 6-5 in Sochi to secure the bronze medal at the Winter Olympics.

Having lost out 6-4 to Canada on Wednesday for a place in the final, Great Britain needed to pick themselves up from that disappointment to fight for a first Olympic medal in 12 years.

On that occasion it was gold in Salt Lake City and, although the prize this time was not as alluring, it was still something to aim for.

And aim they did, as Eve Muirhead’s Great Britain side were made to scrap all the way by a just as determined Swiss team, well marshalled by Mirjam Ott.

And it was the Swiss team that took a two in the second to establish a lead, before a double take-out in the third end by Switzerland meant that Muirhead had to take just one point before passing the hammer over to Ott.

Another double take-out from Muirhead hereself with her first shot in the fifth end saw Great Britain go into the interval all square at 3-3.

Switzerland went 4-3 up before a measurement was needed to confirm that one of the British stones was closer to the centre.

Great Britain went into the 10th end level but had the hammer, and it was fitting that Muirhead, who had kept her cool throughout, took her chance to roll the final stone into the circle in easy fashion to clinch the bronze medal with a 6-5 score.

That equals Great Britain’s best-ever Winter Olympic medal haul of four way back in 1924, a total that is sure to be bettered when the Great Britain men’s curling team take on Canada in Friday’s Final.