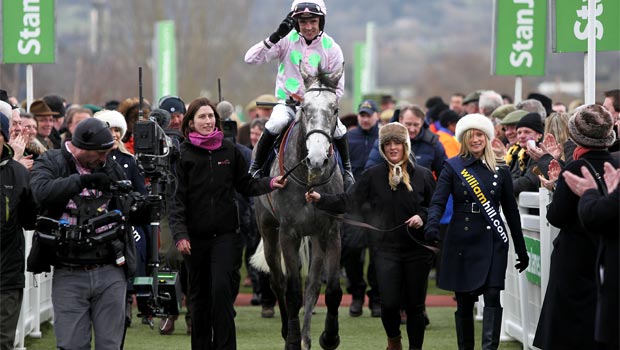 Dual Cheltenham Festival winner Champagne Fever may be stepped up in trip in a bid for a third consecutive victory at Prestbury Park come March.

The Willie Mullins trained grey landed the Champion Bumper in 2012 and gained a memorable success over My Tent Or Yours and Jezki in last season’s Supreme Novices’ Hurdle.

However, chasing was always the plan for the seven-year-old, winner of seven of his 12 starts under rules, and indeed he got his campaign over fences off to the best possible start when comfortably scoring at Punchestown in November.

Installed as ante-post favourite for the Arkle Chase at Cheltenham, he was expected to cement his claims in the Racing Post at Leopardstown on Boxing Day, but was soundly beaten behind Defy Logic, a bad blunder two out not helping his cause.

All this has caused Mullins to revise his thinking about Champagne Fever’s main target, as he also has the luxury of housing Felix Yonger, who comfortably beat Defy Logic at Punchestown in November, at his County Carlow base.

Speaking on At The Races, Mullins explained:

“Champagne Fever has done everything right, but Felix Yonger hammered Defy Logic and Defy Logic won the race the other day.

“Defy Logic was going right-handed around here (Punchestown). Maybe he is better going left-handed in Leopardstown.

“It’s debatable how well he was going. Some people say he was going very well. Other people think maybe that’s as good as he was. I think it was a fantastic performance out of Defy Logic.

That would appear to sum the situation up perfectly, and with Champagne Fever also holding entries in the two-and-a-half-mile JLT Novices’ Chase and RSA Chase over three miles, a third Cheltenham Festival success is not a forlorn hope just yet.