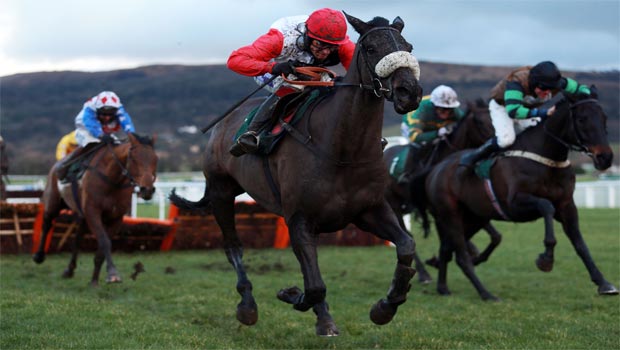 Trainer Paul Nicholls is happy with Big Buck’s after the 11-year-old came through his comeback run at Cheltenham beaten but unscathed.

Big Buck’s made history in 2012 by winning four consecutive World Hurdles at the Cheltenham Festival, but had not been seen since picking up an injury more than 13 months ago.

Nursed back to health at Ditcheat, the gelding made his long-awaited reappearance at Cheltenham on Saturday, taking on just five rivals in the Grade 2 Cleeve Hurdle, and despite a lengthy absence, was sent off as favourite.

Jockey Sam Twiston-Davies sent him into the lead three out, but with conditions worsening at Prestbury Park, he tired up the hill and was passed by both eventual winner and rank outsider Knockara Beau, and At Fishers Cross.

However, Nicholls was upbeat afterwards.

“I’m delighted with him, he travelled with all his old zest and jumped well, but he just got a little tired after the back of the last,” he said.

“It’s very testing ground and we could easily have taken him out and saved him for another day, but I was desperate to get a run into him before the World Hurdle.

“This was only the second time he’d been on grass since his injury, I wanted another racecourse gallop but the ground wouldn’t allow it.

“That will improve him enormously. I’m thrilled, I would obviously have liked to have won, but that will put him bang on for his next run.

And there was more positive news on Sunday when Nicholls tweeted: “Big Buck’s fine this morning. Eat up last evening & this morning and legs cold. All other runners fine. Bring on March 13. # World Hurdle.”