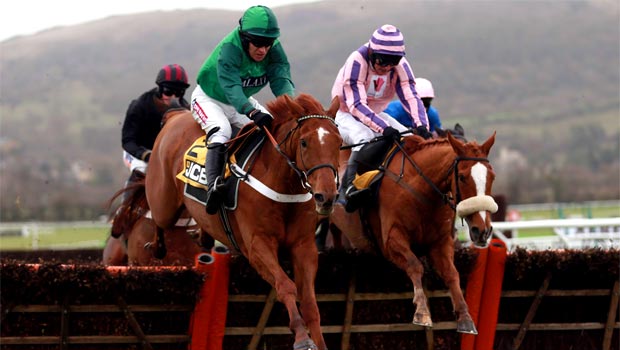 The Triumph Hurdle picture was thrown into disarray on Saturday when outsider Ballyglasheen prevailed at odds of 33/1 in the opening race on the card.

The winner, trained in Wales by Evan Williams, was totally unconsidered in an eight-strong field in a race used as a stepping stone to the Cheltenham Festival by the season’s top juveniles.

With the likes of Nicky Henderson and Paul Nicholls represented, few gave a second glance to Ballyglasheen who had been keeping much lesser company.

However, the 33/1 chance, the most experienced runner on view, was able to battle his rivals into defeat up the hill as the fancied Kentucky Hyden and Vicenzio Mio were found wanting in the closing stages.

Winning jockey Paul Moloney said: “He’s quite similar to Barizan, he travels and he jumps so we’ll see. But we’ll enjoy today because it was a surprise, but racing is full of surprises.”

Trainer Evan Williams added: “The fact he was 33/1 tells you we didn’t fancy him, but often what these horses have done on the Flat doesn’t make any difference to what they can do over hurdles.

“We’ve won this with a couple of similar types, and you know that coming back here in March will be a totally different thing. He is, though, for sale to anyone who wants to go for the Triumph.”

Barry Geraghty, on board the runner-up Kentucky Hyden was full of praise for the winner, while of his own mount he said: “It rode a nice race, we went a nice clip and the winner did it well. It was a good run and I’m sure he’ll go on to better things as well.”

It is a long time until March, and there are still plenty of unexposed horses to appear, but Ballyglasheen is already well experienced and none will battle tougher on the day should he line up.