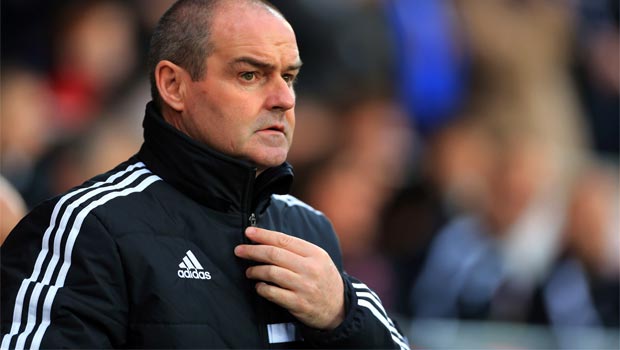 West Brom have taken the decision to sack head coach Steve Clarke after slipping to within two points of the relegation zone following a fourth successive defeat.

The Baggies were unable to halt their current slide down the Premier League table on Saturday as a Peter Whittingham goal gave Cardiff all three points in the clash in South Wales.

After the game, Clarke admitted that he had begun looking nervously over his shoulder given Albion have only won three times this season, coupled with their current position, but gave no indication he was set to leave the Hawthrons.

However, the club announced late on Saturday night that Clarke had been removed from his position and that they had placed him on gardening leave, along with assistant Kevin Keen.

West Brom’s sporting and technical director Richard Garlick told the club’s official website: “We have reluctantly come to the decision to relieve Steve of his duties after very careful consideration.

“It has been well documented that we have not had the rub of the green in certain games this season but that does not cloud the generally disappointing points return during this calendar year, culminating in today’s fourth-successive defeat at Cardiff.

“This club’s track record proves we do not take such decisions lightly, having only enforced a change in this position three times in approximately 14 years.

“But with key games coming thick and fast, we felt it was important we acted now to give the club the best possible chance of a successful outcome this season.”

Joint-assistant head coach Keith Downing will now take charge of the first team while the club conduct their search for a new manager.

Former Albion boss Roberto Di Matteo has emerged as the shock early favourite to replace Clarke, with the Italian having previously been in charge of the Baggies between 2009 and 2011 before being sacked following a poor run of results.

Others names being linked with the job include Martin Jol, Ole Gunnar Solskjaer and Sean Dyche.