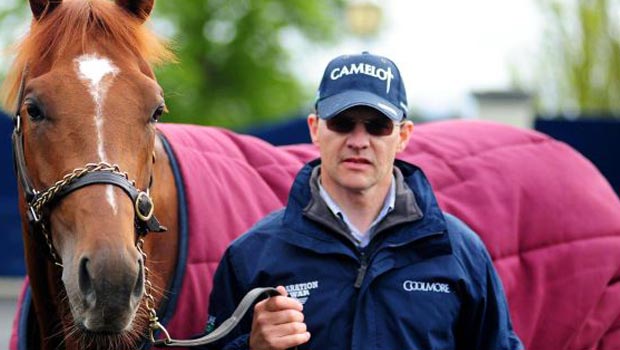 The Aidan O’Brien-trained Australia will line up as the most fancied of the Ballydoyle inmates in Saturday’s Investec Derby.

O’Brien has four Epsom Derby winners to his credit so far – Galileo, High Chaparral, Camelot and Ruler of the World – and in Australia has a horse that boasts all the right credentials on breeding to add to the tally.

His fast-finishing second in the 2000 Guineas was gained when not one 100% ready and he is expected to take all the beating by his big-race jockey.

O’Brien’s son, Joseph, said: “I’m really looking forward to it. Ever since he came into the yard and started working he’s always been a good horse. He’s bred to stay the trip, bred to handle the track and bred to win the Derby which is what you need going to Epsom. It’s the ultimate test of a racehorse.

“You need to have a horse with pace, balance and that will get the trip. It’s a funny track to ride at times, with Tattenham Corner and all the different things running down into the straight, it’s the ultimate test of horse and rider. It’s the race every jockey wants to win.

“He’s got plenty of pace, hopefully he’ll get the trip but it’s an unknown, his mum and dad handled the track well. We’re looking forward to it.”

Australia would not want the ground to ease considerably though, and with that in mind Epsom clerk of the course Andrew Cooper said on Tuesday night: “We’re going to leave it as good at close of play. There was some light rain in the area this morning, just enough to wet the grass, and the going stick is at 7.8, which is an indication of good ground.

“We are forecast showers, maybe starting at 2am or 3am and going on for most of the day. It sounds like they are going to be light, possibly five millimetres, so it’s not a deluge. If that’s what we get, the ground’s not likely to get worse than good.

“Thursday is dry and then it gets warm and more humid, which does leave the chance of rain by Saturday. So we’ll see what we get and play it by ear.”

If Australia were to be pulled out, Ballydoyle still have three more entries, including Geoffrey Chaucer, who by all accounts has been working very well at home of late.