Victorious Rory McIlroy on top of the world 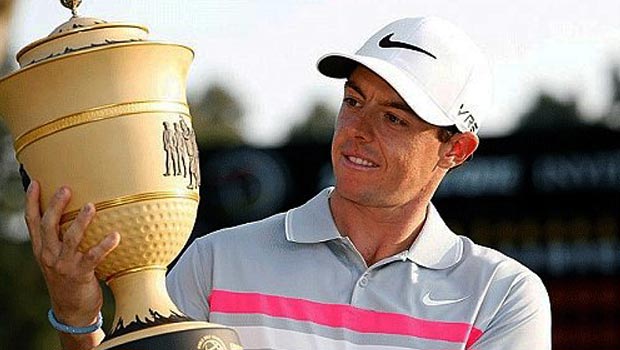 Rory McIlroy has returned to the top of the world rankings after winning the WGC-Bridgestone Invitational on Sunday.

McIlroy won the tournament in Ohio by two strokes from Sergio Garcia, following up his success at The Open in perfect style.

He now regains the position at the top of the world rankings for the first time since March 2013, replacing Adam Scott at the summit.

“I’m really proud of following up the Open with a performance like this. I wanted to keep going and keep performing until the end of the season,” McIlroy said.

“It’s great to come to one of my favourite tournaments of the year and to perform like this, I am pretty satisfied.”

McIlroy went into Sunday’s final round at Firestone three shots behind Garcia but was on equal terms after just four holes.

The Northern Irishman posted a four-under 66 to finish on 15 under for the tournament, while Garcia carded 71 to end his hopes of a first PGA Tour win since 2012.

“Everybody saw it,” said Garcia, who also had to settle for second at Royal Liverpool.

“He played very, very well. He drove the ball miles and very, very straight for the most part. He gave himself a lot of birdie looks.”

It is McIlroy’s first win at a World Golf Championship and he becomes only the second golfer in history, after Tiger Woods, to win a WGC and a major in consecutive starts.

McIlroy will be a part of Europe’s Ryder Cup team for next month’s showpiece at Gleneagles. Led by Paul McGinley, Europe are 1.72 favourites to win the event, which begins on September 26.