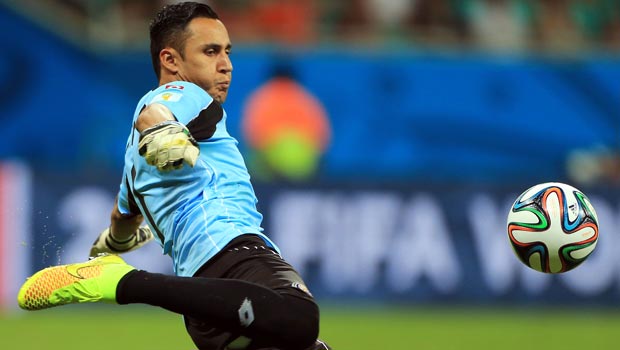 Real Madrid goalkeeper Keylor Navas insists he is prepared to battle for the number one jersey next season after successfully completing his switch from Levante.

Navas was confirmed as the latest Los Blancos arrival on Sunday after signing a six-year deal with the European champions.

The move comes after the highly-rated goalkeeper impressed for Costa Rica at the World Cup and helped his nation reach the quarter-finals.

The 27-year-old also enjoyed a solid domestic campaign with Levante last season. He made 160 saves in total – the highest in the division – and also had the highest shot-stopping percentage at 80%, conceding just 39 goals in 37 matches.

Navas now joins the capital giants to fight for a starting place with Diego Lopez, last season’s first-choice goalkeeper for La Liga, and Iker Casillas, their goalkeeper for the Copa del Rey and Champions League campaigns.

He admits he will have to work hard to compete with his new colleagues but is confident he will be given a chance after being handed a contract until 2020.

“Earning the number one spot won’t be easy,” Navas is quoted as saying by AS. “Six years give me peace of mind. I’m going to work hard, and learn from the Real Madrid players.”

Meanwhile, Spanish stopper Lopez continues to be linked with an exit from Real, with Monaco touted as his most likely destination.

Real Madrid are 1.85 favourites to win La Liga next season and are priced at 5.00 to retain the Champions League trophy.