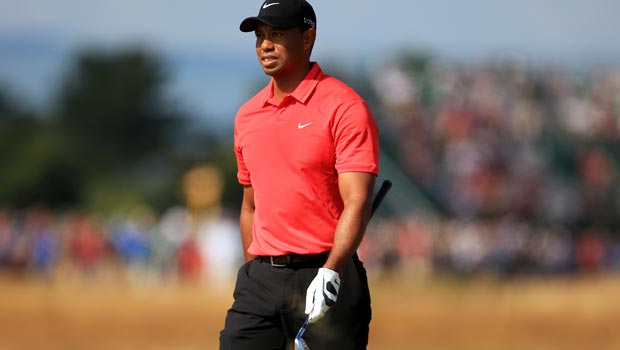 Tiger Woods is a doubt for the US PGA Championship and Ryder Cup after suffering another back injury in Sunday’s final round of the WGC-Bridgestone Invitational.

Woods was competing in in Ohio when the problem occurred and withdrew midway through the fourth round.

The 14-time major champion hit an awkward shot from the lip of a bunker on the second hole and jarred his back.

He showed no initial discomfort but after a series of wayward shots – including a routine iron which found water at the sixth – he slowly deteriorated before his tee shot at the ninth appeared to make the problem worse.

Woods was taken off the Firestone course in a cart and was spotted by reporters struggling to get into his car.

“It happened on the second hole when I hit my second shot. I fell back into the bunker. Just jarred it. It’s been spasming ever since,” said Woods.

The injury raises major doubts over his condition ahead of the US PGA Championship at Valhalla this week.

When asked about his chances of playing at the event, Woods replied: “I don’t know, I’m just trying to get out of here.”

If Woods pulls out of the US PGA Championship it is highly likely he will miss the Ryder Cup in September.

USA captain Tom Watson said in June he would only use a captain’s pick on the former world number one “if he’s playing well and he’s healthy”.

Watson is already going to be without Dustin Johnson for Gleneagles after he announced a sabbatical from golf due to personal reasons.

The USA are 2.12 to win the Ryder Cup next month, with the tournament set to begin in Scotland on September 26.