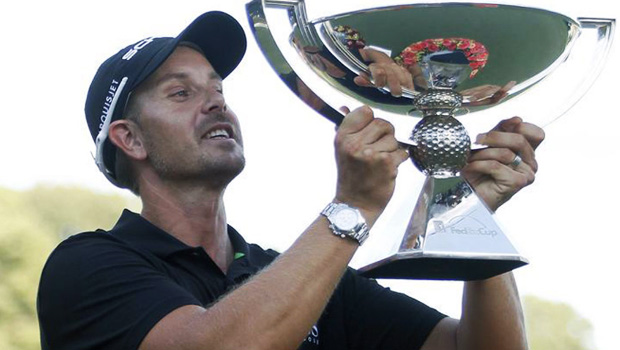 Henrik Stenson held his nerve to win the Tour Championship in Atlanta on Sunday evening, picking up a staggering $10 million bonus in the process.

The Swede had to endure an anxious final three rounds as young Jordan Speith emerged as a big danger, sinking birdie after birdie from the 13th to lie just one shot behind at one stage.

However, Stenson, who had led from day one, refused to panic and when Speith’s luck ran out with a bogey at the 17th it left the path clear for the 37-year-old to deservedly pick up the biggest pot in golf. In the end he won by three shots from Speith and Steve Stricker to claim a total of $11.4 million, more than enough to cover disastrous losses incurred in a business venture four years ago.

It was due reward for a fantastic season that really began with a third to Phil Mickelson in the Scottish Open and continued with seconds in The Open and WGC Bridgestone Invitational, a third in the US PGA and a win in the Deutsche Bank Championship that saw him top the FedEx rankings.

The pressure appeared to be getting to Stenson when he smashed his driver into the ground in frustration during the BMW Championship, but that was all forgotten as he celebrated a momentous victory in Atlanta.

“Since the Scottish Open it’s just been an incredible run and I don’t know what to say. I am speechless. The results I have produced and to hang in there – it was a tough day out there today – I’m really satisfied,” he said.

“The first two and a half rounds was incredible tee to green. I had a couple of hiccups on the back nine in the bad weather on Saturday and to be honest I didn’t feel that confident with my game, I had to battle it a little today but I am very pleased and proud with the way I kept it together. To win both these trophies today feels unbelievable.

“It just shows one should never give up and always keep on trying harder. I managed to come back out of some bad slumps twice and that just shows always hang in there and try your best and good things will come your way eventually.

“It hasn’t quite sunk in yet. I had to fight hard mentally to keep all this aside and go out there and do my job and I managed to do that and this is going to feel better and better as the week moves on, I am pretty sure about that.”

The Swede will will be confident of battling it out for the Majors when the tour begins again in earnest early next year.