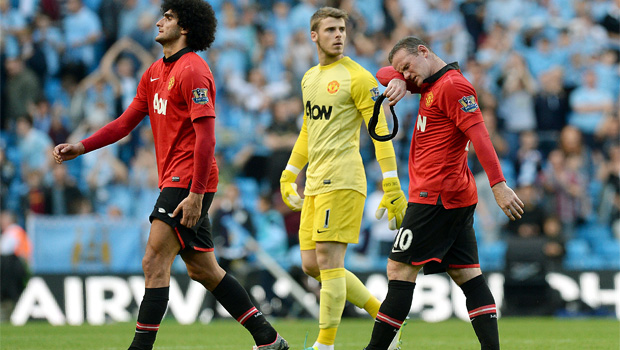 Manchester United manager David Moyes is confident that his side can recover from a 4-1 mauling by neighbours City.

Sunday’s short journey to the Etihad turned into a nightmare for United as their Manchester rivals tore them apart, with two goals from Sergio Aguero and one apiece from Yaya Toure and Samir Nasri doing the damage. In truth it could have been more, but Wayne Rooney at least gave the scoreline a bit of respectability, pulling one back late on.

That will be no consolation to United fans, who saw their side suffer their worst defeat at the Etihad since 2004, and now Moyes must seek to quickly make sure that City, Chelsea and Arsenal do not steal a march on them in the title race.

“If ever there was a group of players I would expect a reaction from after a defeat it is the Manchester United players,” he said.

“They react and that is what they will do.

“Every manager has bad days and bad results. I am no different. I have been here with Everton many times and I don’t think I suffered a defeat like this.

“I talked with the players the same as I would at any other club. They are good pros here and they know when they are bang at it and when they are not.

“We didn’t play well enough to win the game. We conceded poor goals. We needed to get closer in the second half but they get away and score more goals.

“We hoped to stem that tide in the second half. We got better as the game went on but it was too late. Manchester City played well and deserved the victory.”

Vincent Kompany was a rock at the heart of the City defence, and his return to the side was evident, but he was not getting too carried away.

“When we won 6-1 at Old Trafford I said we needed to stay humble, it’s only three points,” he said.

“But it gives us all the confidence and allows fans to celebrate for a couple of days. We’ve been looking forward to it, our fans have been speaking about it for a long time and we needed to win.

“We have a fantastic home record and we know there is no reason we should fear the opposition.”

United, meanwhile, have the diversion of a home Capital One Cup tie with arch-rivals Liverpool on Wednesday.