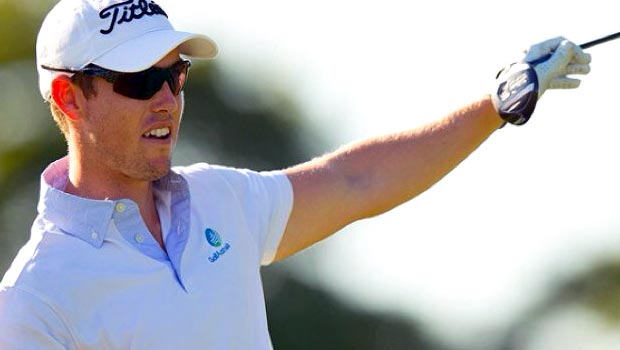 Defending champion Adam Scott was overshadowed by surprise package Nathan Holman as the Melbourne local grabbed a share of the half-way lead at the Australian Masters.

Scott, the US Masters champion, was flawless on another blustery day at Royal Melbourne, carding a five-under round of 66 for a nine-under total of 133 and a one-shot lead with 22-year-old tour rookie Holman.

Scott made a perfect start with three straight birdies but then had to grind his way through a frustrating run of 11 straight pars before picking up strokes on the 15th and 17th holes.

The 33-year-old later told reporters that he felt it could have been a really low round after some of his other birdie putts came close on at least half a dozen holes.

“I was hoping it was going to be one of those days. But it definitely cooled off. It kind of feels like I plodded along. It wasn’t an exciting five-under at all.”

The crowd favourite, who won the Australian PGA Championship in the Gold Coast last week, is bidding to sweep Australia’s three marquee tournaments ahead of the national Open in Sydney.

Holman and Scott sit a stroke ahead of overnight leader Nick Cullen and fellow Australian Matt Griffin on eight-under.

Holman lit up the course early, sharing the day’s best round of six-under with Griffin, another Melbourne local, who once did odd jobs at the famed sandbelt course as a teenager.

World number eight Kuchar stands alone in fifth place after carding a 66 set up by a blistering front nine as he warms up for the United States’ title defence at the World Cup of Golf at the same course next week.