Boxing: Joshua on a roll after third straight win

Posted by Vincent Henderson on November 15, 2013 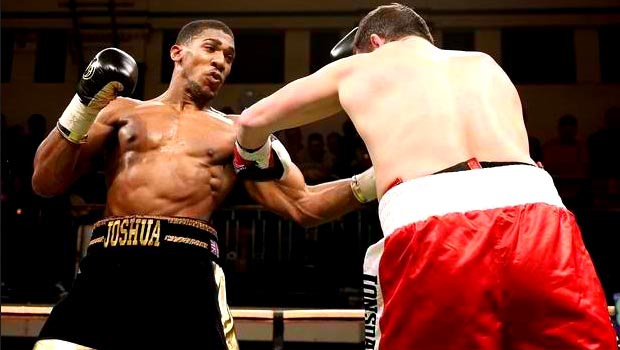 Anthony Joshua made it three wins out of three in his professional heavyweight career after a second round stoppage of Croatia’s Hrvoje Kisicek in London’s York Hall.

The Olympic super heavyweight champion had dismissed his first two opponents inside two rounds and maintained that record against a durable Croatian who had taken young Hughie Fury six rounds earlier in the year.

Joshua started strongly and looked sharp in round one, picking his shots well.

His obvious height and reach advantage meant that he could keep Kisicek out of range with his jab, with his opponent seemingly incapable of throwing anything with aggressive intent.

The Croat looked to keep on the move, lunging with an occasional left hook, but the 24-year-old Englishman tagged him with a straight right hand and classy combination had him covering up on the ropes.

However, Joshua did not rush in for a first-round stoppage, stepping back to allow himself to set his feet for another polished attack.

Kisicek survived to the bell but the end came midway through the second round, when a quality left uppercut from the North Londoner, followed by a right and left hook put the journeyman down for the first time.

He was up at the count of four but Joshua rocked his man again shortly after and, with Kisicek on the ropes taking some punishment, the referee decided to call it off.

Joshua is being kept busy by his Matchroom promoters and will be in action next weekend in Manchester as part of the undercard of the Carl Froch v George Groves super-middleweight world title fight.

He is then scheduled to fight former Welsh amateur champion Dorian Darch at London’s ExCel Arena – the scene of his Olympic triumph – in December.

“I worked on a few things in there,” he told Sky Sports. “He was cagey, awkward and durable.

“It’s important to work on things in the gym and take that to the ring. I’ll be in Manchester next weekend performing again and I need to be ready for that.”