Posted by Jason Stepford on November 2, 2013 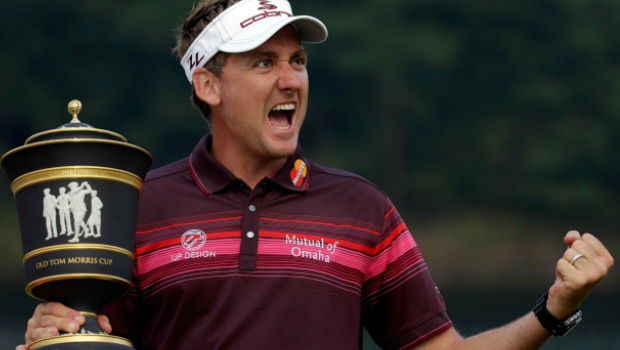 Ian Poulter is relishing the opportunity to become only the second man behind Tiger Woods to successfully defend a WGC title after he fired himself into contention at the HSBC Champions with a superb third-round 63.

The Ryder Cup ace climbed up to second place on the leaderboard on the back of a sizzling round which included eight birdies and an eagle, with the only blemish being a bogey four at the par-three 17th.

The 37-year-old still has some ground to make up on leader Dustin Johnson, although the American gave the chasing pack some hope as two double bogeys cost him the chance of extending his five-shot halfway lead.

Three clear though is still a great position to be in going into the final round, but Poulter is convinced that he can rise to the challenge when he plays alongside Johnson in the final pairing.

“I just need to do my thing tomorrow and make a lot more than he does,” Poulter said.

“I’m going to have to see what happens coming down the stretch. It will always be great to be in the last group, seeing what’s going on. It fires you up even more.

“I have to do my thing tomorrow. It’s only Saturday. You can’t win tournaments on Saturday,” Poulter added.

“It’s all about playing well on Sunday. I need to do that. I need to make plenty of birdies, try and make an eagle; if I can, I can get close.”

Graeme McDowell also made a move with a fine round of 64 to move into third place, four adrift of the lead and two clear of a trio of players at 12-under – Rory McIlroy, Justin Rose and Graham DeLaet.

Martin Kaymer was in blistering form as he broke the course record with a flawless 62 but perhaps still has too much to do as he lies in a share of seventh at -10 with Bubba Watson and Boo Weekley.