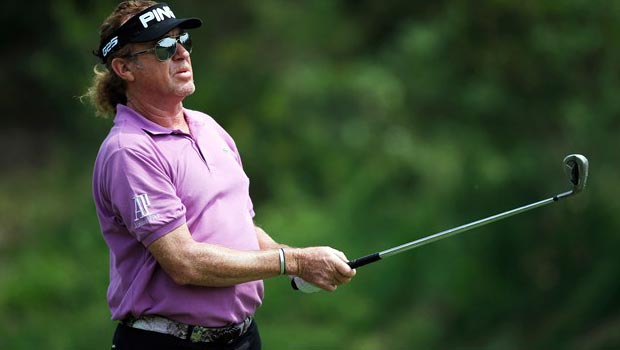 Miguel Angel Jimenez has set his sights on a place in the European Ryder Cup team after securing a thrilling play-off victory in the Open de Espana title at PGA Catalunya.

The 50-year-old continued his record as the oldest-ever winner on the European Tour and finally ended his long wait to win his national Open title in Spain when he edged out Thomas Pieters and Richard Green at the first play-off hole after the trio all carded a four-under-par 284 for the tournament.

Green enjoyed the best final round as he fired a level par 72, while Jimenez was one over and overnight two-shot leader Pieters could only manage a three-over 75 on the tough Stadium Course.

In the play-off all three players hit poor tee shots when they failed to find the green in two, but Jimenez came out on top when he almost chipped in to leave a simple par which the other two could not match.

A delighted Jimenez is hoping to use the win on home soil to stake his claim for a place in the Ryder Cup team when battle resumes against the United States at Gleneagles in Scotland from September 26.

“I’ve played so many times in the Spanish Open, it’s great to finally win it, it’s amazing to win the national Open of my country,” Jimenez told Sky Sports.

“Every title is special, and you don’t like to say one is better than the other but to win the Spanish Open is very, very important to me.

“It’s amazing. It’s my 21st victory on the European Tour and 27 times I played the Spanish Open. I have been close a couple of times. Today it was very tough out there but I got it in the end.”

Jimenez, who has enjoyed a successful 2014 as he came fourth in the Masters before winning on his Champions Tour debut added: “I would love to be in there as an old player in the Ryder Cup, I’m 50 and still knocking on the door!”