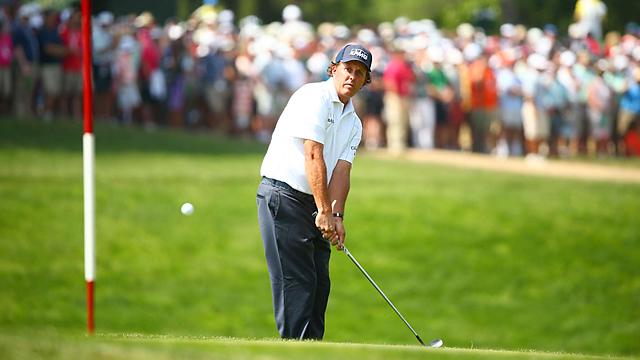 Phil Mickelson bids to end his run of near misses with victory in the US Open as he goes into the final round.

Phil Mickelson is relishing the challenge at Merion as he bids to end his run of near misses with victory in the US Open as he goes into the final round one shot clear of Hunter Mahan, Steve Stricker and Charl Schwartzel.

Mickelson let his halfway advantage slip with bogeys at the second and fifth holes but recovered those shots with birdies at the 10th and 11th, before a birdie at the 17th restored him to the top of the leaderboard

The 43-year-old’s round of 70 was enough to secure the lead at one-under-par going into the final round and he is optimistic of his chances of finally landing the title.

“I’m looking forward to it and the challenge of Merion. I love being in the thick of it,” he said.

“I have had opportunities to win and it’s been fun even though it has been heartbreaking to let it slide, but I feel better equipped than ever and I feel very comfortable on this course.

“Given that I have had some major successes I feel as equipped as I could be. I don’t think I feel any more pressure than anyone else who wants to win. But it would certainly mean a lot to me.”

History is maybe against Mickelson as he goes in search of the top honours as no third-round leader in the four previous US Opens at Merion has gone on to lift the trophy.