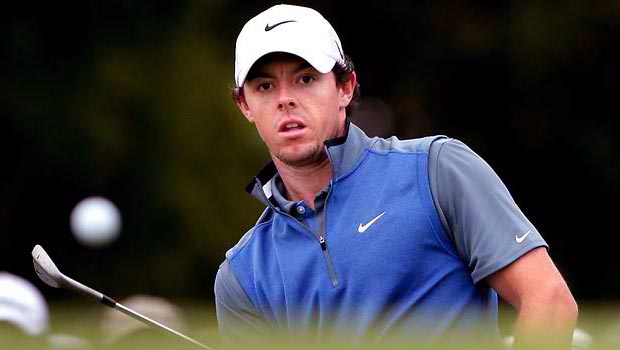 Rory McIlroy is closing in on Australian Open leader Adam Scott after moving to within two shots of top spot with a fine seven-under-par 65 in his second round.

The Northern Irishman has endured a torrid year on and off the course but is looking to end 2013 on a high with his first tournament victory in 12 months.

The world number six’s chances of success in Sydney looked slim when Scott shot a course-record 62 on day one, leaving McIlroy trailing by seven shots.

However, McIlroy benefitted from some favourable conditions on the morning of day two as he shot a round of 65 for only the fourth time this year to move to 10-under overall.

In contrast, Scott had to cope with a blustery, wet afternoon as he fired a 70 which included seven birdies, three bogeys and a double bogey.

At one point the Australian found himself behind McIlroy on the leaderboard but recovered to move to 12-under overall.

Scott, who is looking to become only the second man to win the Australian Triple Crown, says he is expecting McIlroy to push him all the way this weekend, despite the former world number one’s lack of consistency this year.

“It was a tough afternoon with plenty of good stuff in there but then I made a few mistakes in the tricky conditions. Overall it was pretty good and given how difficult it was, I was pleased I held it together pretty well,” Scott said.

“It was always going to be a day where you just had to hang on.

“He (McIlroy) is one of the best players in the world so I’m going to have to bring my best game.”

Elsewhere, Richard Green is a shot further back on McIlroy at nine-under after a round of 66, while Matthew Jones is on eight-under.

American Kevin Streelman had to withdraw from the event after just four holes on Friday with an eye problem that resulted in him being taken to hospital for treatment.