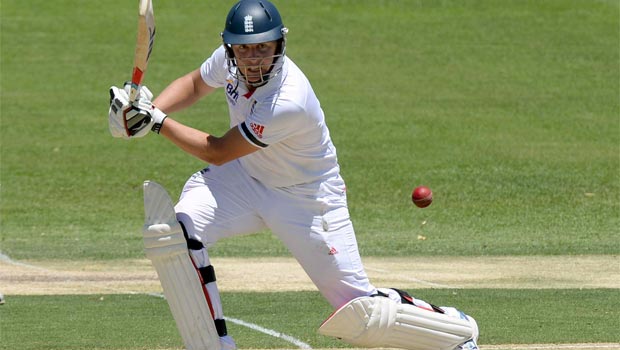 Gary Ballance put his name firmly in the frame to replace Jonathan Trott for the second Ashes Test with an impressive knock on day one of England’s tour match against the Cricket Australia Chairman’s XI.

The tourists are looking to replace Trott for next week’s clash in Adelaide after the batsman returned home due to a stress-related illness.

While Joe Root is expected to be promoted up the order to bat at number three, Trott’s exit has left an opening in England’s starting line-up.

Ben Stokes, Jonny Bairstow and Gary Ballance are believed to be the three men battling it out to get the nod to face Australia, with all-rounder Stokes thought to have been leading the way heading into this week’s tour match in Alice Springs.

However, Durham’s Stokes could only manage 28 on day one of the two-day clash with the Chairman’s XI, while Bairstow reached 31 not out as England toiled in the hot weather to reach 212-7 declared.

Ballance proved to be the star of the show, as coming in at number three he top-scored with 55 before he was run out by James Muirhead following a mix up with stand-in skipper Ian Bell.

Having scored just four in his two previous innings on this tour of Australia, Ballance was happy to find some confidence in the Outback, although he isn’t getting too carried away about his chances of playing in the second Test.

“After a few low scores, you take a bit of time to get used to the situation. But once I’d batted for a few overs I felt comfortable, and it was just like any other innings,” said the Yorkshire batsman.

“It would have been nice to push on and get a hundred, but I’ve given myself a bit of confidence, so if I get the chance then I’ll be ready.

“It would be a great feeling [to play in Adelaide] but I don’t want to look too far ahead.

“If selected, I think I’ll be ready. The boys are working really hard, and we’re going to be ready for Adelaide.”

The Chairman’s XI reached the close of play on day one at 16-0, leaving Steven Finn and Boyd Rankin just one day to stake a claim for the next Test.

England currently trail Australia in the Ashes series after losing the first Test in Brisbane by 381 runs.