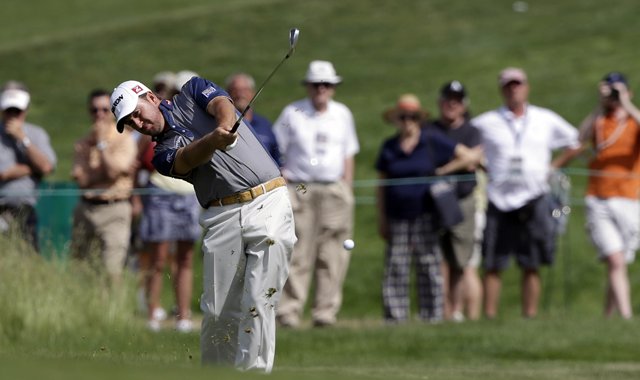 Thunderstorms have been forecast to hit the 113th US Open but Graeme McDowell does not believe it will make the course any easier over the duration.

Thunderstorms and high winds have been forecast to hit the 113th US Open taking place at Merion near Philadelphia, but Graeme McDowell does not believe it will make the course any easier over the duration.

Heavy downpours earlier this week have softened up the course and there have been fears that the course record could be threatened by further rain over the weekend.

Merion, which is hosting for the fifth time but first for more than 20 years, is the shortest course at 6,996 yards to hold the US Open since
2004 at Shinnecock Hills.

Although the course will punish errant play with the way the rough has been set up, there are fears that softer fairways and greens will allow the players to shoot low scores at what is traditionally the toughest major to win – Webb Simpson won last year with a score of one-over-par.

However, McDowell actually believes that the course set-up will thoroughly test the players, even with the prospect of more rain.

“I think they’re underestimating it,” said the 2010 US Open champion.

“I think there’s 10 or 11 holes on this course that are as tough as any US Open I’ve seen. The last five holes, I can’t think of a tougher finish at a US Open.”

Tiger Woods’ resurgence this year – winning four times already in 2013 and returning to the top of the world rankings – sees him starting the tournament as the favourite.