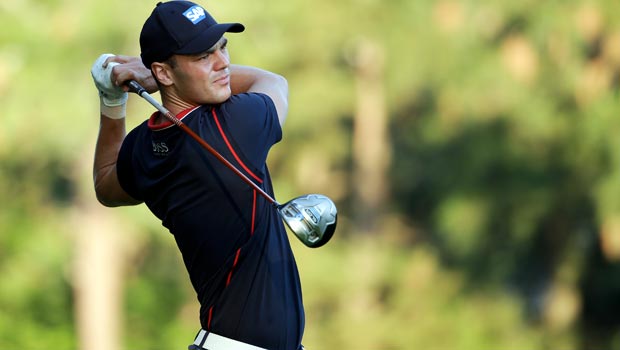 US Open leader Martin Kaymer believes the Pinehurst No 2 course is only going to get more difficult as the tournament goes on in North Carolina.

Kaymer took a three-stroke lead after the first round as he posted a superb five-under par 65 to lead from a trio of players on two-under.

After going to the turn in one-under 34, the German raced into the lead on the back nine.

Kaymer’s score of 65 beat the previous lowest score of 66 in a US Open at Pinehurst, set by Peter Hedlbom in 2005.

But while the world number 28 is in a strong position going into round two and was pleased with his golf on Thursday, he admits he is taking nothing for granted on the tricky course.

“If you shoot anything under par or level par on that golf course, it’s good.

“I watched some golf this morning and I was very surprised how playable it was because yesterday (in practice) I played in the morning and it was very firm so they must have put a lot of water on the greens last night.”

He added: “Usually, it only gets more difficult and more firmer and faster.”

Kaymer won the Players Championship in May and lifted his only major title at the US PGA in 2010.

The 29-year-old is currently three strokes ahead of early clubhouse leaders Graeme McDowell and Kevin Na, while Francis Quinn and Brendon De Jonge also hit 68 to finish on two-under.

Kaymer is now 5.00 to win the US Open while pre-tournament favourite Rory McIlroy is 15.00 after his opening round 71 left him one-over.