Posted by Jason Stepford on February 7, 2014 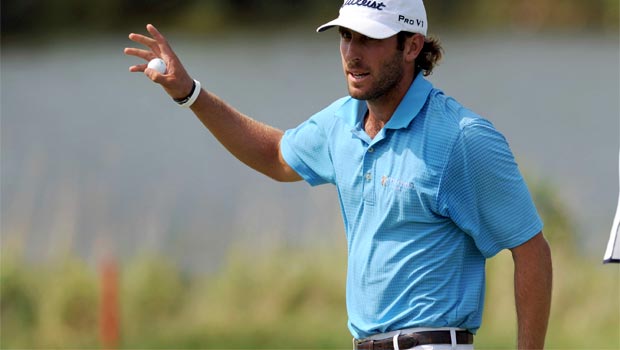 Web.com Tour graduate Andrew Loupe is the shock first-round leader at the AT&T Pebble Beach National Pro-Am after a sensational round of 63 on the Californian coast.

The 25-year-old carded eight birdies in a bogey-free round and he leads by two strokes on eight-under par, with five players a couple of shots adrift and several stars still to complete their opening round due to the weather.

The tournament is played at three different courses with the cut made after three rounds, and Loupe secured top spot at Monterey Peninsula, with Stuart Appleby, Jim Renner, Scott Gardiner and Richard H Lee also playing that course and ending up in a tie for second on -6.

Jimmy Walker joined them on that mark, having made six birdies at Pebble Beach, while Phil Mickelson proved that his back injury is now fine by reaching five-under par after 15 holes when time was called for the day.

He is one of 10 players to reach -5, with Englishman Brian Davis putting in his best performance of the year and with two holes still to play to try and improve on his five-under-par round.

European Ryder Cup captain Paul McGinley also reached five-under, while Dustin Johnson and Hunter Mahan are two of the big names lurking at -4 and in great shape to challenge for the title.

Last week’s winner, Kevin Stadler, still has two holes to play and is in a large group of players on three-under, but it is Loupe that grabbed the headlines, and the youngster admitted that it is still a surreal experience even to be playing in the event.
“You’re not putting next to the guys you’ve been putting next to,” he told the PGA’s official website. “You’re not hitting balls to the guys you’ve been hitting balls next to.

“I’m looking at guys I’ve been watching on TV, you know, and it’s just realizing that I’m supposed to be here.”