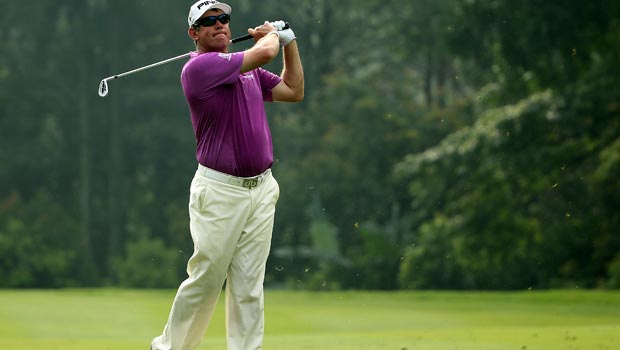 Lee Westwood has moved four shots clear of the field at the Maybank Malaysian Open on 13-under par after an excellent second round of 66.

The Englishman has shown signs of recovery in recent weeks after a dip in form which has seen him slide from world number one down to 36th in the world rankings.

After a winless 2013 and bad start to 2014, Westwood opted to change his coach and the move appears to be paying off, the 40-year-old finishing seventh at last week’s Masters.

Westwood is looking to follow up that solid performance at Augusta with his first win on the European Tour since the Nordea Masters in June 2012 and is in pole position in Kuala Lumpur heading into the weekend.

The Ryder Cup star fired eight birdies in total on Friday, with the only blemish on his round coming in the form of a double bogey at the 11th after he had found the water.

Westwood, who has recorded 12 of his 40 professional wins in Asia, is clear of the field after Friday, with Belgian Nicolas Colsaerts and Antonio Lascuna of the Philippines his nearest challengers on nine-under.

“On the front nine I shot five under (for the second day running) and I think the longest putt I holed was from four feet on the first. It was solid stuff.

“I got a little unlucky at 11 I thought, it was one of the best shots I hit all day and the wind just gusted on me and it came up short in the water. But I rallied after that and ended up shooting 66.”

Westwood’s superb round was somewhat overshadowed on the day by Pablo Larrazabal, who was forced to dive into a lake during his round after being attacked by hornets.

Despite being stung several times the Spaniard was able to regain his composure and birdie the hole as he shot a four-under 68.