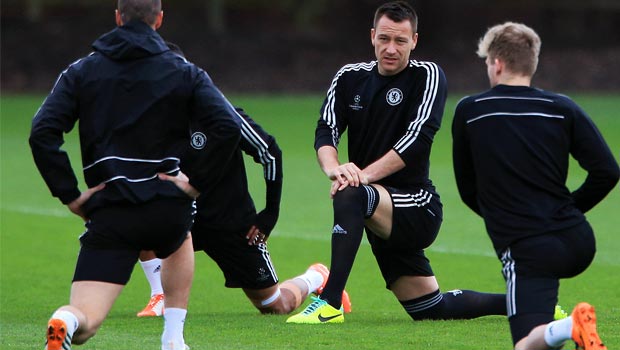 Chelsea assistant manager Steve Holland has revealed captain John Terry is close to signing a new contract with the club.

The former England skipper has re-established himself at the heart of the Blues defence this season after being used sparingly by predecessors Rafael Benitez and Roberto di Matteo.

The 33-year-old has made 32 Premier League appearances this term and has formed a solid partnership with Gary Cahill at the back.

Chelsea’s defence has been the meanest in the league this season, conceding 24 goals in 34 games, and Mourinho is keen to see Terry stay on as a result.

There have been some rumours Terry would reject the chance to stay at Stamford Bridge after being offered a deal which would see his current wage halved.

However, Holland believes Terry is now ready to put pen to paper on a new contract and says there could be an announcement in the next two weeks.

“John has had an outstanding season; we have the best defensive record in the Premier League and he’s played in almost all of that and been a major part of it all,” said Holland.

“I know that John wants to stay at Chelsea, and Chelsea want John to stay, so hopefully that situation can be concluded amicably over the next few weeks.”

Holland went on to say that Frank Lampard and Ashley Cole are also in contract negotiations and is tipping the England duo to stay on in west London beyond the end of this season.

“It’s the same situation (with Lampard and Cole), we’re dealing with not just normal players, but magnificent servants for this club over a long period,” he said.

Chelsea are expected to include the English trio in their squad for Saturday’s game against basement boys Sunderland. The Blues are strong favourites at 1.20 to win the game, with the Black Cats 11.44 to pick up a much-needed three points.