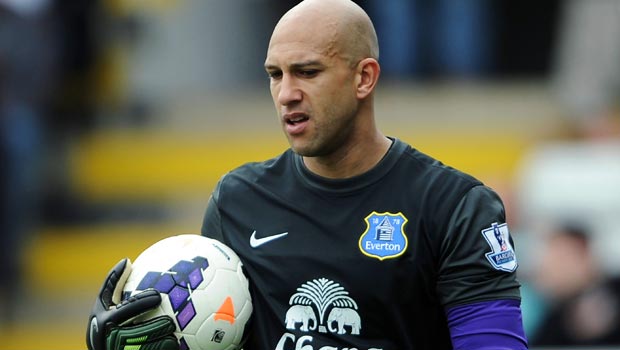 Everton manager Roberto Martinez has paid tribute to goalkeeper Tim Howard after the USA international signed a two-year contract extension with the club.

The 35-year-old has been a stalwart in the Toffees team since he joined from Manchester United in 2006, making 342 appearances for the Merseysiders.

The shot-stopper has now signalled his intentions to finish his career at Goodison Park by extending his contract through to 2018, when he will be 39.

Martinez is delighted to see Howard commit his future to the club and says he features heavily in his long-term plans for Everton.

“It is fantastic news. He has been vital to our overall achievements,” said the Spaniard.

“To have Tim performing as he has this season, I cannot see past him to choose the best goalkeeper in the league.

“He is the perfect role model for our football club. We have a good group of young goalkeepers who can follow that sort of example, and that is why it’s so significant he has agreed to stay with Everton for a long, long period.”

Howard’s form has been a key part to Everton’s push for Champions League football this season, keeping 13 clean sheets in total.

The American will hope to make it 14 shut outs this weekend when his old club Manchester United come to town, a game Everton need to win after Wednesday’s defeat to Crystal Palace.

The Toffees are a point behind Arsenal in the race for fourth but that could be four points by the time they kick-off against United if the Gunners can beat Hull City earlier in the day.