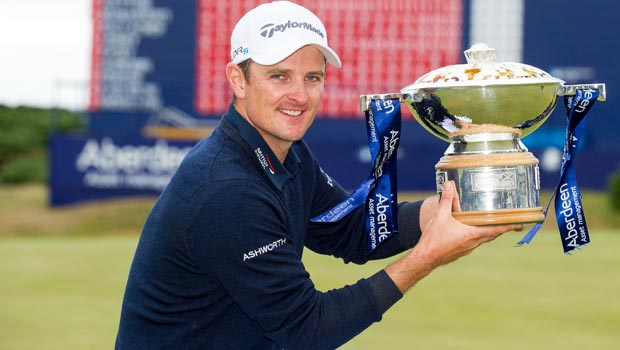 In-form Justin Rose will tee off as one of the favourites for the Open after winning the Scottish Open in Aberdeen on Sunday.

Rose landed the US Open last year and bounced back to form when capturing the Quicken Loans National on the PGA Tour recently.

However he had never managed to win back-to-back events until now, when he handled the links conditions perfectly to move three ahead of the field at one point before ending with a round of 16 under par 65, two shots ahead of Swede Kristoffer Broberg with Scot Mark Warren another three shots back in third.

Broberg played a great round and was rewarded with one of the three qualifying places for the Open, with England’s Tyrrell Hatton who came joint fourth and Scotland’s Scott Jamieson who was joint eighth clinching the other two spots.

Rose meanwhile will now try and emulate Phil Mickelsen who took the Open last year after coming out on top in Scotland the week before at Castle Stuart.

The Englishman had given the Scottish Open a miss for the past two years, but was up for the challenge this time round.
“I thought I would try and do a Phil this year and put it on my schedule. So far so good,” he said.

“It’s unbelievable to be back in the winners’ circle so quickly but right now I am feeling great. I don’t feel the two wins have taken a lot out of me. I feel that I’ve taken it in my stride.

“The Open is going to come around quickly so tonight is going to be calm and relaxed. I will enjoy the moment but my mind will definitely be back in the game as of tomorrow.”

The Open gets under way at Hoylake on Thursday, so do check out all the very latest Dafabet golf prices.