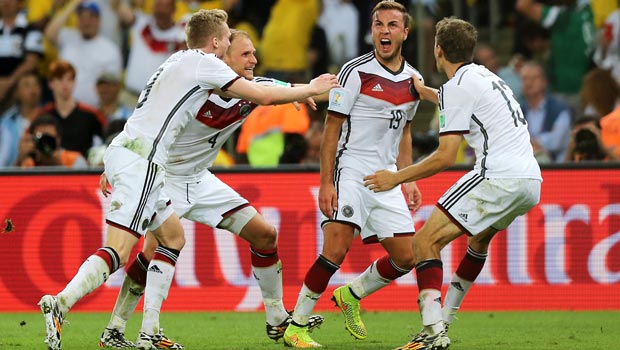 After a 24-year wait, Germany have once again won the World Cup thanks to a superb extra-time goal from substitute Mario Gotze.

The two best teams in the tournament, Germany and Argentina, lined up for the 2014 showpiece at the Maracana in Rio, in what was expected to be a very close encounter, and that is the way it turned out.

There were chances for both teams throughout the first half alone though, with Argentina denied the lead when Higuain’s close-range effort was ruled offside, while at the other end Miroslav Klose nearly headed home from Lahm’s cross.

Higuain was also guilty of a glaring miss when somehow managing to drag the ball wide after being gifted an awful back pass header by Tony Kroos, and Messi saw his shot cleared off the line by Boateng.

The Germans knew that this was not going to be anything like the semi-final romp over Brazil, but their fortunes would change much later on thanks to Andre Schurrle, who came on at the end of the first 45 minutes to replace an injured Cristophe Kramer.
However, they nearly went behind soon after the restart when Messi had the goal at his mercy, but the little man somehow contrived to drag the ball wide with his normally trusty left foot.

In an engaging encounter, Benedikt Howedes then saw his header from a Kroos corner crash back off the post, while Klose saw his involvement end with two minutes of normal time left when the ultimate hero Gotze was sent on by Low.
In extra-time, with the stakes getting ever higher, Sergio Aguero caught Bastian Schweinsteiger with what looked like a punch below the right eye that drew blood.

And then came the moment that had German fans all over the world rejoicing, as Schurrle raced up the left on 113 minutes and sent over a sublime pass that was chested down by Gotze, who, reminiscent of the legendary Gert Muller, controlled the ball in an instant to volley home.

It was a goal worthy of winning the World Cup, and it did, with Argentina unable to lift themselves in response.

Afterwards Gotze summed his goal up in simple fashion, saying: “Andre [Schurrle] put in a superb ball and I was able to control it on my chest, then somehow the ball was in the net,” said the new hero.

“It’s difficult to put it into words,” he continued.

“I can’t describe what it’s like in the changing room right now. It’s probably exactly the same back in Germany. I think we played well as a team throughout the whole tournament and every one of us deserves this. It’s a great feeling for everyone in Germany and for us as a team.”

Now thoughts turn to Euro 2016 in France, and in particular Group D in which both Scotland and the Republic of Ireland must face Germany who will quite rightly be the ante-post favourites.