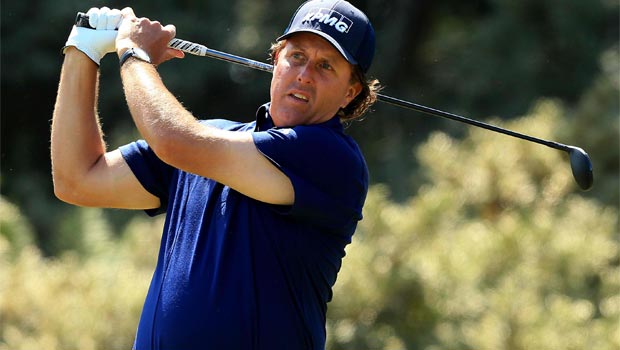 A back problem has caused Phil Mickelson to pull out of the PGA Farmers Insurance Open after Friday’s second round at Torrey Pines.

The 43-year-old struggled with muscle pain in his back during his one-over 73 on the South Course, and, with so many big tournaments on the horizon, the left-hander felt it was wise to call it a day.

“I have the entire year, I’ve got majors coming up, I’ve got other tournaments coming up and I don’t want to get into bad habits,” Mickelson said.

“My game is pretty sharp getting ready to start the year, and I could tell I’m making terrible swings out there relative to the way I’ve been swinging.

“I love this tournament and I want to play here.

“I love playing in San Diego, and this is a place where I grew up playing, so I really want to play. And part of me also says that I’m getting in bad habits, and if I hit it in this rough here, I’ve really got an issue because I’ve got to swing awfully hard to get it out and it jars it.”

A magnificent round of 63 propelled fellow American Jordan Spieth to the top of the leaderboard on 10-under-par. The Texan has a one-shot advantage over overnight leader Stewart Cink, who shot a disappointing 71.

“Any time you can shoot a lower score than a 66 or 65 and you can really get it deep and be in a zone and not worry about what your score is … that’s special,” Spieth said.

“That’s proving that I can play my best golf when it matters on a PGA Tour venue. Each time you can do that, you get more and more confident that you can do it more often.”