Everton: Martinez up for cup double 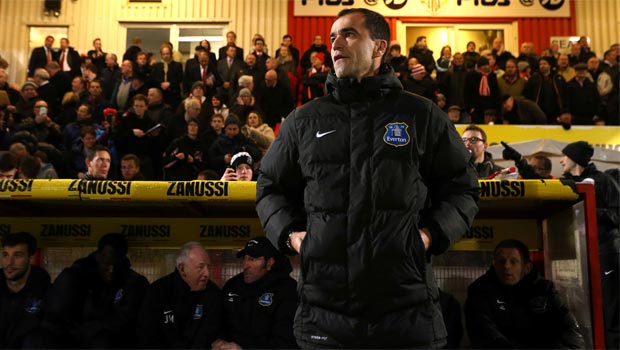 Everton manager Roberto Martinez hopes to continue his love affair with the FA Cup by winning the famous trophy with two different clubs in consecutive years.

Martinez surprised just about everyone as he led Wigan to a shock FA Cup success last year – beating Man City 1-0 in the final at Wembley – an achievement that helped land him the job as David Moyes’ successor at Goodison Park.

Whilst some Premier League managers see the FA Cup as an unwanted distraction, Martinez cannot get enough of club football’s most prestigious domestic competition.

Speaking before Everton‘s trip to League One Stevenage today, the 40-year-old told The Liverpool Echo: “It would be hard to let it go.

“There is an affinity you develop with the trophy because it’s so special.

“It represents all the strong values football should have; someone to have a dream and be allowed to chase it.

“We know we’ll be tested on Saturday.”

Everton should make it through to the fifth round of this year’s competition without too much difficulty as they take on a Stevenage side rooted to the foot of the League One table having lost four of their last six games.

The Toffees brushed aside Championship high-flyers QPR 4-0 at Goodison Park in the last round and are priced at 1.22 to book their passage, with Graham Westley’s men on offer at 10.58 and the draw at 6.03.

Martinez has confirmed that Ross Barkley and Steven Pienaar are still unavailable, on top of the long-term injuries to Arouna Kone, Darron Gibson and Gerard Deulofeu.

This will be just the second time the two teams have ever met, with the other game coming at the start of this season in the League Cup’s second round – the Toffees squeezing through 2-1 after extra time at Goodison.