Posted by Jason Stepford on November 8, 2013 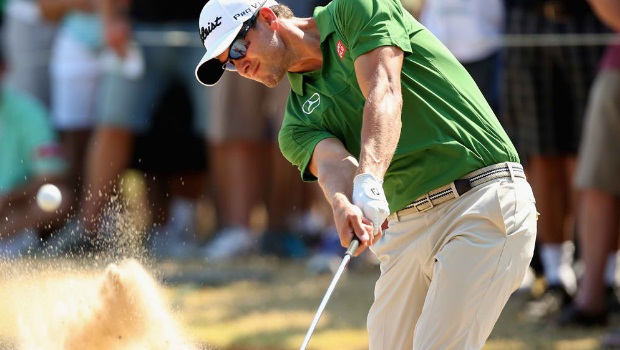 Adam Scott has opened up a two-shot lead at the halfway stage of the Australian PGA Championship after posting a four-under par 67 on Friday.

The Masters champion trailed US star Rickie Fowler by two shots after the first 18 holes but is now three clear of the Californian, who could only manage a one-over par 72 on day two.

Scott sits on ten under, with fellow Aussie David McKenzie two shots back, while New Zealander Gareth Paddison and Nathan Green joined Fowler on seven under with two rounds to go.

Steven Jeffress and Kiwi Josh Geary share sixth place on six under, while Jason Scrivener and Ashley Hall are a further shot back.

But they will all have to catch Scott over the weekend, as the world number two showed his class by carding two birdies and an eagle in an error-free round to take the tournament by the scruff of the neck.

But despite putting himself in pole position to claim another tournament victory, the 33-year-old admitted that he was not at his best.

“I got off to a great start but couldn’t keep it going,” he said. “I found it a little tricky to get the eye in today.
“But we’re playing some pretty tough holes in between the ones I feel I can take advantage of.”

Fowler is likely to provide Scott with his biggest threat over the weekend and the 24-year-old hopes that, after a disappointing display on Friday, he can pick up his game to show his true colours.

“Usually there’s one tough round in a tournament when you have a chance to be in contention,” said the jovial youngster.

“Hopefully that was the one that I got out of the way and I have two good ones the next two days.”