Posted by Jason Stepford on December 4, 2013 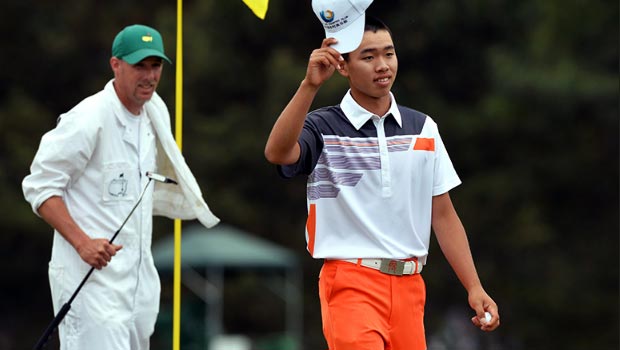 Chinese youngster Guan Tianlang admits he has few nerves ahead of this week’s Hong Kong Open and is confident of doing well.

The 15-year-old made history earlier this year when he became, at 14, the youngest player to make the cut at the Masters.

He qualified for the Augusta showpiece by winning the 2012 Asia-Pacific Amateur Championship in Thailand, and made full use of his entry into the year’s first major with a superb display.

The Guangzhou-born starlet finished in a tie for 58th place in Georgia overall and, in the end, won the prize for the lowest amateur.

He was then given a sponsors exemption in the PGA Tour’s Zurich Classic of New Orleans event and went on to make the cut before falling away badly over the final two rounds to finish in last place.

But it was all good experience for the talented youngster and, as he prepares for his third outing on the European Tour in the former British colony, the boy who was born after Tiger Woods won his first Green Jacket appeared relaxed and raring to go.

“I’m going to enjoy the week and shoot some low scores,” he told reporters. “I don’t feel the pressure at all as I’m still doing the things that I’ve been doing and I feel comfortable.

“I’ve not set any targets for myself but if I can put four good rounds together I’ll be happy.”

Guan will face a lot of golfers from the Far East this week plus a few regulars from Europe, with defending champion Miguel Angel Jimenez of Spain still going strong and looking for his 20th victory on the European Tour.