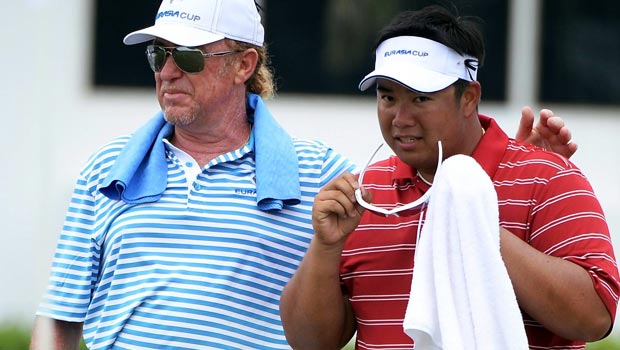 Asia gave Europe a taste of their own medicine with a final day comeback at the inaugural EurAsia Cup as they secured a 10-10 draw in Malaysia.

Miguel Angel Jimenez’s men started the day 7-3 up and needing just three-and-a-half points to secure a victory which had looked like a foregone conclusion at times during the first two days.

Europe had whitewashed their hosts 5-0 in Thursday’s fourballs and maintained their grip on the contest in Friday’s foursomes.

However, in a performance similar to that of Europe’s in the 2012 Ryder Cup in Medinah, Thongchai Jaidee’s side men were able to claw their way back into the match in Saturday’s singles, and even looked like completing a stunning victory at one point.

Jaidee led from the front with victory over Graeme McDowell in one of the day’s early contests before his opposite number Jimenez hit back to beat Nicholas Fung with a birdie at the 18th.

Jimenez’s win was to be one of only two Europe managed to record on the final day, Thailand’s Kiradech Aphibarnrat and Kim Hyung-sung seeing off Thomas Bjorn and Pablo Larrazabal in the next two matches.

Jamie Donaldson then held his nerve to card a birdie at the last to secure half a point against Prayad Marksaeng, the Welshman having thrown away a four-hole lead.

Victories for Gaganjeet Bhullar, Anirban Lahiri and Siddikur Rahman then put Asia ahead for the first time this week before Joost Luiten kept the match alive with a win over Japan’s Koumei.

That meant the EurAsia Cup came down to the final pairing of Spain’s Gonzalo Fernandez-Castano and Japan’s Hideto Tanihara.

In a nerve wracking finale, Fernandez-Castano fell behind at the 15th before levelling the tie with an eagle at the 16th.

Tanihara was then able to save par from a greenside bunker at the 17th before his opponent putted from three feet to ensure half a point each.

Skipper Jaidee admitted afterwards he had no seen a finish like Saturday’s before and was proud his players were able to secure a share of the EurAsia Cup.

“Every part of my team was unbelievable to come back, fantastic,” said Jaidee.

“Everyone played really well. I think the match is unbelievable, it was a good finish.

“To end on the last, and on the 18th hole, it’s fantastic. I have never seen a match like this. It’s very close and amazing.

“We had a good draw and good pairings, I think that’s the key point.”