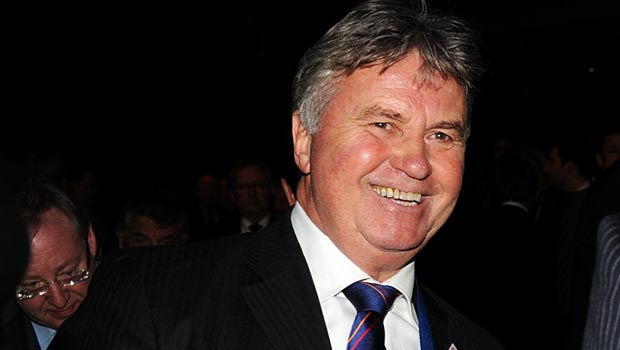 The Dutch Football Association, the KNVB, have taken the unusual step of naming their next two head coaches, with Guus Hiddink to replace Louis Van Gaal after the 2014 World Cup.

While it is not unheard of for a managerial successor to be named while the current incumbent is still in the job, the KNVB also confirmed that Hiddink would stand down after Euro 2016 and be succeeded by Danny Blind.

Before stepping up to the role of head coach Blind will act as assistant to Hiddink during his two-year spell in charge of the Oranje.

Hiddink has been the favourite to replace Van Gaal for some time since the former Barcelona boss confirmed he would not renew his contract after this summer’s World Cup.

Van Gaal is now expected to return to club management, with Tottenham and Manchester United said to be two clubs interested in his services.

Meanwhile, Hiddink will inherit an extremely talented squad for his second spell in charge of the Netherlands.

The 67-year-old spent three-and-a-half years in the role between 1995 and 1998, culminating in Holland finishing fourth at the 1998 World Cup.

Hiddink has since switched between domestic and international football, taking charge of the likes of Real Madrid, Chelsea, Australia, Russia and, most recently, Turkey.

The experienced tactican says he is delighted to get a second crack at managing his home nation and is looking forward to working with Blind and Ruud van Nistelrooy as part of the new coaching set-up.

“I am honoured to return as coach for the Dutch team,” he said. “With Danny Blind and Ruud van Nistelrooy we also have a solid team with a lot of football knowledge and experience.

“It is wonderful that I can oversee my own succession. In this way the football vision for the Dutch team in the long term can be guaranteed.”

For now Hiddink can only watch matters from afar as Van Gaal puts the finishing touches to his World Cup preparations.

The runners-up at the 2010 World Cup are priced at 28.00 to lift the trophy this time around, with hosts Brazil the favourites at 3.60. See also Brazil world Cup odds too.